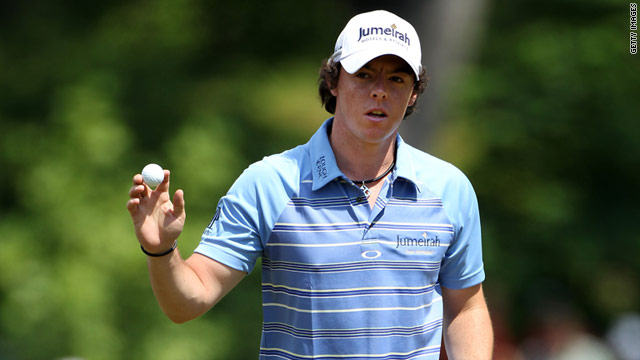 Rory McIlroy tore up the record books as he proved a class apart on the second day of the U.S. Open at Congressional.
STORY HIGHLIGHTS

(CNN) -- Northern Irishman Rory McIlroy equaled the biggest halfway lead in U.S. Open history, after a sensational second round display at the Congressional course in Maryland.

The 22-year old, who squandered a four-stroke lead going into the final day at this year's U.S. Masters, showed his genius by carding a five-under-par 66 to lead by six shots.

His only dropped shots over the two days came on the par-four 18th, where his approach found the water and resulted in a double-bogey six.

Yang, whose round was interrupted by a heavy storm, eventually carded a 69 to leave him on five-under-par for the tournament.

McIlroy shows bounce-back-ability, but can he win?

Despite the disappointment of his final hole six, McIlroy's round will go down in history, as the European Ryder Cup star produced some of the most sublime golf ever seen in a major.

McIlroy carded five birdies and a remarkable eagle two at the par four eighth, where his approach rolled back into the hole.

It's been two very, very good days of golf and I've put myself in a great position going into the weekend
--Rory McIlroy
RELATED TOPICS

That shot saw him became the first player to ever hit double digits under par in the second round of the U.S. Open -- and the records kept on coming after that.

Prior to the final hole double bogey, McIlroy also became the first player in history to reach 13-under-par at a U.S. Open.

His six-stroke advantage at the halfway stage equals the record set by Tiger Woods in 2000, when the world number one at the time led by six strokes, before eventually going on to win by 15 strokes.

"It feels quite simple. I'm hitting fairways, I'm hitting greens, I'm holing my fair share of putts. It's been two very, very good days of golf and I've put myself in a great position going into the weekend."

He added: "But I know more than probably anyone else what can happen, so I've got to stay really focused and try and finish this thing off."

And, talking about his record-breaking round, McIlroy said: "These records, they're nice, but they don't really mean anything until the end of the tournament.

"If I can look back on this tournament with a trophy in my hand and look back at the records that would be nice."

McIlroy is attempting to follow his good friend Graeme McDowell in taking the trophy to Northern Ireland for a second successive year.