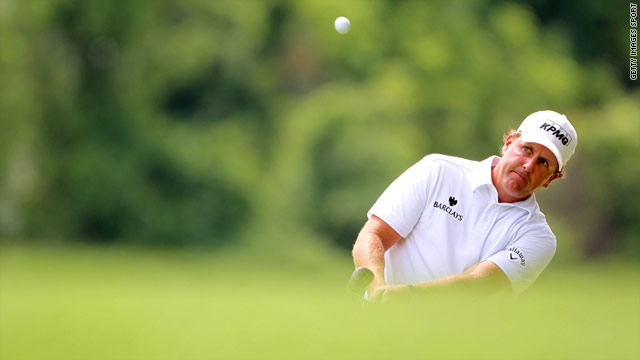 Phil Mickelson will be hoping for a return to form at the upcoming British Open.
STORY HIGHLIGHTS

(CNN) -- The British Open is a sporting event that venerates maturity.

It is, after all, the world's oldest golf tournament -- this will be the 140th Open Championship -- one that has seen the game's greats, from Bobby Jones to Jack Nicklaus, hold the Claret Jug aloft.

It is also the tournament that best embodies the reverential ethos of the Royal & Ancient, the custodian of the game's rules.

The Open may bathe in the glow of experience, but the sport is now changing. Golf, it seems, is a young man's game. Rory McIlroy was just 22 when he won the U.S. Open last month. The average age of the last five major winners was just 27.

For 41-year-old Phil Mickelson -- ranked sixth in the world -- you'd be forgiven for thinking he might resent finding himself prematurely elevated to the ranks of the old guard. But not a bit of it.

I think American golf is still in pretty good shape, but it's become such a global sport...I enjoy seeing that
--Phil Mickelson
RELATED TOPICS

"I love to see it because the game of golf needs to have good young players come up and win big tournaments," he told CNN.

"We have our young players in America coming up, Dustin Johnson being one of our stronger players as well as Rickie Fowler who's right on the brink of winning."

Winning is something Mickelson hasn't experienced a lot of in recent months. When the revelations about Tiger Woods' private life emerged, it was Mickelson who was best placed to take his mantle as the world's best golfer.

After his stunning Masters victory in 2010, his third at Augusta, the left-hander seemed set to dominate the sport. But just one tour victory followed as golf's brat pack emerged.

However, ahead of the British Open starting at Royal St. George's in Sandwich next Thursday, Mickelson feels confident he has done his homework on a course he has found particularly taxing in the past.

"I spent the last few days at Royal St. George's getting ready for the British Open. I was so impressed. After 2003, I went in with very low expectations ... I didn't really care for it," he said, referring to the infamous 2003 Open, also held at the English course, where he fired a final-round 78.

"But after spending two days (here), I love Royal St. George's ... I didn't get to see the subtleties last time. I started to see the beauty and the nuances of the golf course and I thought it was terrific."

"Royal St George's is going to be a really great site for the British Open next week."

Mickelson's final preparations conclude at the Scottish Open, held at Castle Stuart, where he shot a one-over par 73 on Thursday, eight shots behind first-round leaders Lee Westwood of England and surprise package Mark Tullo from Chile.

Both fired seven-under-par rounds of 65, with world No. 2 Westwood claiming six birdies and an eagle in front of Alex Ferguson, the Manchester United football coach, who was in the crowd for what is his hometown course.

Home-crowd favorite and Europe's 2010 Ryder Cup captain Colin Montgomerie shot a 67 to move onto five under, with the 48-year-old needing a top-five finish to qualify for Sandwich.

Montgomerie, who was joined on five under by world No. 1 Luke Donald, South Africa's Retief Goosen and Italian Edoardo Molinari.

They were one shot behind Peter Hanson of Sweden, George Coetzee and Denmark's Thorbjorn Olesen, who were tied for second place on the leaderboard.

Mickelson's first round in blustery conditions came apart at the 14th, where he carded a double bogey. Yet the San Diego-born golfer believes he is in good shape to capture one of the two majors -- along with the U.S. Open -- he is yet to win.

American golf fans will be hoping that Mickelson hits form at the right moment. Since Tiger Woods' drop in form, many would argue that U.S. golf has been in the doldrums, relinquishing the Ryder Cup to Europe last year.

And since Lucas Glover won the 2009 U.S. Open, an American has won just one out of the subsequent seven majors: Mickelson at the Masters in 2010.

Yet despite the emergence of a host of new stars from Europe, Africa, Asia and South America, Mickelson believes that American golf is still strong and that the increased globalization of the game can only be a good thing.

"I think American golf is still in pretty good shape, but it's become such a global sport ... I enjoy seeing that," he said.

"I enjoy seeing Louis Oosthuizen from South Africa winning the British Open, bringing exposure to that part of the world. And seeing Graeme McDowell and Rory McIlroy from (Northern) Ireland win the U.S. Open."

"I think that's brought a lot of recognition into Europe ... as a promoter, appreciator, believer in the great game of golf, I love to see things like that happen."