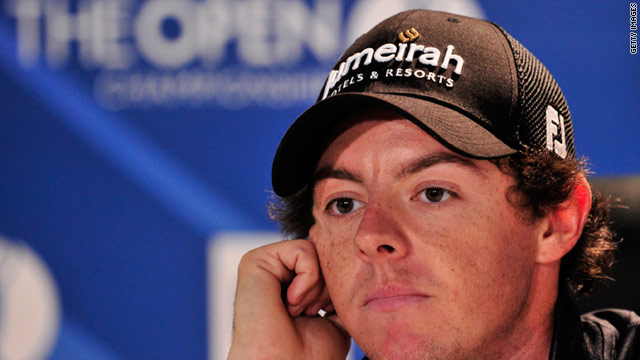 Rory McIlroy faces the media ahead of his bid for the British Open at Royal St George's.
STORY HIGHLIGHTS
RELATED TOPICS

(CNN) -- Rory McIlroy has defended his preparation for this week's British Open as he bids to win back-to-back majors without playing any competitive golf since his U.S. Open triumph at Congressional.

The 22-year-old from Northern Ireland has drawn comparisons with Tiger Woods for the manner of his eight-shot triumph, but has not lifted a club in anger in the intervening three weeks.

It has led his former Ryder Cup captain Colin Montgomerie to question the wisdom of the lack of match practice, but McIlroy was adamant Tuesday that his approach worked for him.

"I mean, I've prepared the exact same way that I've prepared for the last few major championships, and I feel it's a process that works for me, " he told of the official British Open website.

"That works for me. I used to do it to sort of keep under the radar. I'm not sure I'll be able to do that anymore. But it works for me.

Caddying for the world number one

"It might not work for other people, but I feel as if it's the best way for me to approach a tournament. It seems to have worked the last few times, so I just need to keep doing that."

McIlroy has also had to cope with being catapulted into celebrity ranks, with a high-profile appearance at the Wimbledon tennis championships plus a host of other media commitments.

He admitted the reaction to his first major success had been something of a surprise.

"I've already sort of noticed over the past three weeks it has been a bit of a life-changing experience, and it's just something I'm going to have to deal with."

McIlroy tees off at Royal St George's in the 140th edition of golf's oldest major at 9.09 local time with Ernie Els of South African and fellow young gun Rickie Fowler of the United States.

He will be looking to match the spectacular 63 at last year's British Open at St Andrews which gave him the first round lead, but not the second round 80 which ended his chances of victory.

Meanwhile, world number one Luke Donald bids for back-to-back victories of his own after claiming the Scottish Open at Castle Stewart at the weekend.

Donald, who took over the mantle from fellow Englishman Lee Westwood, admitted he was in the form of his life.

"This is probably the best I have ever played," he said as he reflected on a stellar 2011 which has seen him claim three victories and a clutch of top-10 finishes.

It was kickstarted by his victory at the WGC World Match Play tournament in Arizona.

"As soon as you get that one win, it kind of opened up the door, gave me a lot of confidence, and I've been playing very well since then," he added.