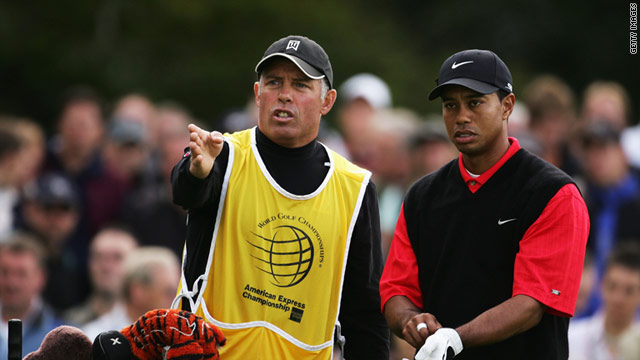 Tiger Woods and Steve Williams have combined to win 13 major titles since forming a partnership in March 1999.
STORY HIGHLIGHTS

(CNN) -- Tiger Woods has confirmed that he will no longer be working with long-standing caddie Steve Williams after a successful 12-year relationship.

Former world number one Woods, who has slipped to 20th in the world and is currently out of action with injuries to his left leg, confirmed the news on his official website.

"I want to express my deepest gratitude to Stevie for all his help, but I think it's time for a change," Woods said.

"Stevie is an outstanding caddie and a friend and has been instrumental in many of my accomplishments. I wish him great success in the future."

The pair joined forces in March 1999, at a time when Woods had won just one major title, and since then they have flourished as a partnership -- claiming 13 majors as well as a remarkable 50 other PGA Tour titles.

The 35-year-old Woods, who has not yet decided on a replacement, missed the British Open at Sandwich last week with knee and Achilles injuries having also missed the U.S. Open last month.

He had been out of action for two months prior to the British Open, initially suffering the injuries at the Masters in April before withdrawing after nine holes of the Players Championship at Sawgrass in mid-May.

The American has not won a tournament since the Australian Masters in November 2009, just before some well-publicized problems in his private life came to light.

New Zealander Williams, 47, has caddied for Australia's Adam Scott at the last two majors and he later issued his own statement confirming that he would now caddie for Scott permanently, while expressing surprise at Woods' decision.

Williams said on his own official website: "After 13 years of loyal service needless to say this came as a shock.

"Given the circumstances of the past 18 months, working through Tiger's scandal, a new coach and with it a major swing change and Tiger battling through injuries, I am very disappointed to end our very successful partnership at this time," he added.

"I have had the opportunity to work of late for Australian Adam Scott and will now caddie for him on a permanent basis."