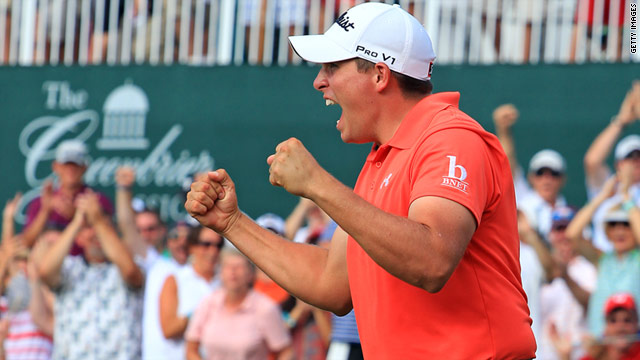 (CNN) -- Rookie Scott Stallings emerged victorious from a three-way playoff at the Greenbrier Classic to secure his first ever PGA Tour title.

The American holed a seven-foot birdie putt on the first additional hole at the West Virginia event to defeat compatriots Bob Estes and Bill Haas and move up to 26th place in the FedEx Cup standings.

The trio had finished level on 10-under par after Sunday's final round at The Old White course, one-shot clear of five players who finished tied for second position.

"To be a champion in such a great event is a huge blessing," the 26-year-old Stalling, who has also earned a spot at this week's World Golf Championships, told the PGA Tour's official web site.

"I've wanted to do this since I was a little kid. I was that little boy running around chasing autographs and yelling at guys because they wouldn't stop and sign my golf balls."

Stallings carded six birdies on the back nine to earn a spot in the playoff, and secured the $1.08 million winner's check when Estes and Haas both missed their birdie attempts.

Two more Americans, Webb Simpson and Kyle Stanley, finished a stroke further back in a tie for ninth place.

It is only the second year the Greenbrier Classic has been a Tour event, with Australia's Stuart Appleby winning the inaugural tournament in 2010.