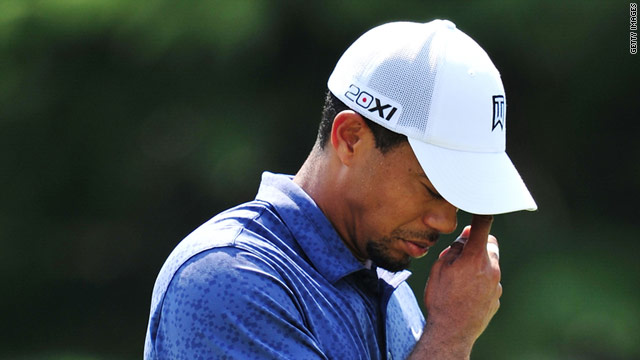 A dejected Tiger Woods contemplates missing the cut for only the third time in a major tournament.
STORY HIGHLIGHTS

(CNN) -- Former world number one Tiger Woods missed the cut for only the third time in a major tournament as American duo Jason Dufner and Keegan Bradley lead the way after the second round of the U.S. PGA at Johns Creek, Atlanta.

Woods, who is playing only his second tournament after four months out with injuries to his left leg, carded a three-over-par 73 to go with his opening 77 for a 36-hole total of 150 (+10), six shots off the cut.

The 35-year-old, who has won 14 majors, has previously failed to make the final two rounds at the 2006 U.S. Open and the 2009 British Open, and on this occasion it means he will not be able to compete in the PGA Tour playoffs for the FedExCup.

Only the top 125 players in this year's rankings are eligible to compete and the world number 30 was ranked 129th prior to the start of the tournament.

"I'll have nothing to do now but work on my game," Woods told the PGA Tour website after confirming he will not play until November's JBWere Masters in Australia.

"Sean Foley (coach) and I haven't had the opportunity to really sit down and do a lot of work, so this will be our time."

Woods, who recorded five double bogeys over two rounds for the first time in any tournament, added: "I showed signs that I can hit the ball exactly how I know I can but unfortunately I just didn't do it enough times.

"This year has been frustrating because I was feeling healthy going into the Masters, put it together there, and was leading the tournament with a few holes to go.

"Then obviously I got hurt and I haven't played since, really. I have not been able to practice and work and obviously compete."

Woods was not the only big name player to miss the cut on a day when some of the PGA Tour's lesser lights shone.

World number three and defending champion Martin Kaymer was the biggest casualty, missing out by a single shot after rounds of 72 and 73.

However, home players are dominating proceedings at the other end, with Bradley carding a best-of-the-day six-under 64 to share the lead with Dufner, who posted a 65, on 135 (-5).

The 34-year-old Dufner, who has never won on the PGA Tour, is a surprise leader having missed five of his last six cuts, but 25-year-old rookie Bradley has been a revelation in his first season, winning the prestigious Byron Nelson Classic earlier this year.

The pair hold a one-stroke lead over compatriots Jim Furyk, Scott Verplank and D.A. Points, along with Australian John Senden.

A further four players, including leading European Anders Hansen of Denmark and overnight leader Steve Stricker -- who followed up his opening 63 with a disappointing 74 -- are another shot behind.

Last week's Bridgestone Invitational winner Adam Scott is among three players just three shots off the lead, while world No.2 Lee Westwood is four off the pace after a 68 and world No.1 Luke Donald is six behind after carding a 71.