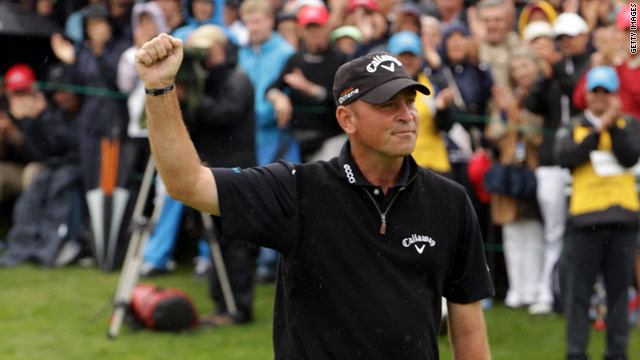 Thomas Bjorn is enjoying the best form of his career after claiming his second successive European Tour title.
STORY HIGHLIGHTS

(CNN) -- Thomas Bjorn has secured his second European Tour title in a week after carding a stunning final round 62 to lift the European Masters at Crans-Sur-Sierre, Switzerland, by four strokes.

The veteran Dane, who held his nerve to win a five-man play-off in last Sunday's Johnnie Walker Championship at Gleneagles, followed up just seven days later by posting a superb nine-under-par score for his closing 18 holes, to finish the tournament on 264 (-20).

Bjorn began the day three shots adrift of Donaldson but, as the Welshman floundered, Bjorn produced some remarkable golf, shooting nine birdies and an eagle to match the lowest score of his European Tour career.

"The way I finished was special and it's been an amazing two weeks for me," Bjorn told the European Tour website.

"I started hitting my wedges so well last week and kept it going. At the end you think nothing can go wrong.

"Golf seems easy sometimes and you have to remember that when you are not playing well," he added.

Bjorn's third victory of the season, he also triumped in Qatar in February, also means he leads the early Ryder Cup standings for next year's tournament against the United States.

The 40-year-old has already featured in two victorious European Ryder Cup teams -- 1997 at Valderrama and 2002 at The Belfry -- and was also a vice-captain to Colin Montgomerie in Europe's 2010 success at Celtic Manor.

Meanwhile, Northern Irishman McIlroy was pleased with his performance on his return to action following the wrist injury he sustained at last month's U.S. Open.

"Coming back off the injury I didn't know what to expect. To get myself into contention was great and the arm felt 100 per cent healthy, which is a huge positive," he told reporters.