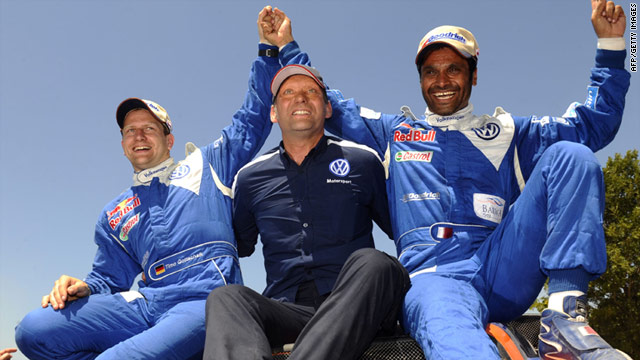 Carlos Sainz won the 13th leg into Buenos Aires from Cordoba to extend his career record of stage wins to 24, but the defending car champion finished third overall behind South African Giniel De Villiers as their Volkswagen team filled the podium.

The 40-year-old Al-Attiyah was delighted following his second-place finish last year, and a disqualification in 2009.

"It means a lot to win a Dakar, for me, for my people, for my country and for my team," he told the race's official website after finishing second in the final stage to head off De Villiers by almost 50 minutes.

It is the biggest moment in my career. I think that now people will finally know where Qatar is located
--Nasser Al-Attiyah
RELATED TOPICS

"It is a great victory. It's hard to explain everything that goes through your head. But it is a very nice feeling. We demonstrated that we have the strongest team in the world. It is the third time the team has won a Dakar.

"It is also the biggest moment in my career. I think that now people will finally know where Qatar is located."

Al-Attiyah also competed for his country at last year's Asian Games in China in shooting, and reached the final of the skeet event.

Sainz's challenge effectively ended with a broken suspension on Thursday, but he finished strongly with wins in the final two stages for seven victories in the 2011 edition, which started and ended in Argentina after heading into Chile through the Andes mountains and Atacama desert.

"No, I am not disappointed. This is how the race goes. After two tough weeks, there is nothing left to say. I gave it my very best shot," said the 48-year-old Spaniard, a two-time world rally champion.

His compatriot Marc Coma clinched a third motorbike crown as he came home fifth, a place behind his main rival and defending champion Cyril Depres of France to guarantee a 15-minute winning margin.

"We all know that a Dakar is a difficult race, but this year it was particularly difficult," Coma said.

"This victory is the reward of all the hard work, the reward of many years and a lot of tensions over the last few days. It is the bonus you get for steering right and for so many sacrifices over the years."

Argentina's Alejandro Patronelli similarly had a big lead going into the final leg, and clinched his first title in the quad bike category as he emulated the 2010 feat of his younger brother Marcos.

Alejandro, second last year, broke his hand with before the 15-day race reached halfway, while Marcos was ruled out after breaking his leg in training in December.

"Here I am, champion with one-and-a-half hands! What a reward. I had not won anything since 2000 and I am now Dakar's number one! I just cannot believe it," Alejandro said.