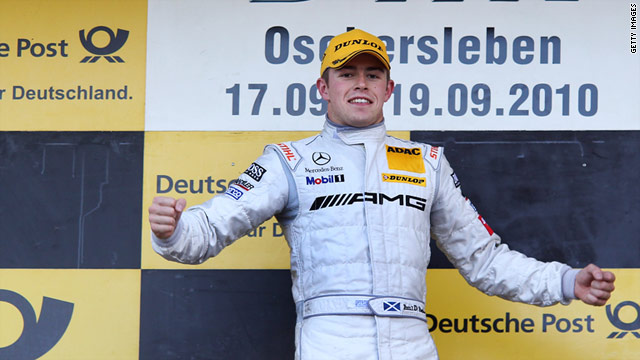 Di Resta has been handed his first F1 drive following his success in the German Touring Car Championship.
STORY HIGHLIGHTS

(CNN) -- Formula One team Force India have confirmed that Scotsman Paul di Resta has been handed a drive, alongside Adrian Sutil, for the 2011 season.

Force India confirmed the news at a press conference at the Glasgow headquarters of whisky company Whyte & Mackay -- one of the team's main sponsors.

The 24-year-old, who was drafted in as Force India's test driver last season and took part in several morning Friday practice sessions ahead of grand prix races, replaces Vitantonio Liuzzi -- who joined the team late in 2009 as a replacement for Giancarlo Fisichella, after his fellow-Italian switched to Ferrari.

However, Liuzzi disappointed last season and trailed German Sutil, who finished a creditable 11th in the driver standings last season with 47 points.

Becoming an F1 driver has been a long-held ambition of mine, something I've wanted to do since I first stepped into a kart
--Paul di Resta
RELATED TOPICS

Speaking on the team's official website, di Resta said: "Naturally I am thrilled to be making my race debut this season.

"Becoming an F1 driver has been a long-held ambition of mine, something I've wanted to do since I first stepped into a kart, and to finally realise it feels amazing.

"I've worked really hard for this opportunity throughout my career and to get it with Force India, a young team that's got ambitions as big as mine, is genuinely exciting. I can't wait to be on the grid in Bahrain, it can't come soon enough."

As well as confirming the signings of di Resta and Sutil -- who will be starting his fourth year with the team -- Force India also revealed that former Williams driver Nico Hulkenberg has been recruited as their test driver for 2011.