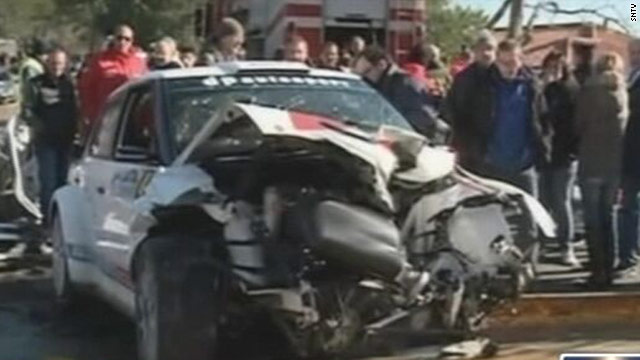 Robert Kubica suffered multiple injuries after crashing his Skoda Fabia car while competing in a rally in Italy.
STORY HIGHLIGHTS

(CNN) -- Formula One driver Robert Kubica has undergone a seven-hour operation in an Italian hospital after crashing while competing in a rally.

The 26-year-old Pole lost control of his Skoda Fabia car at the beginning of the Ronde de Andorra rally near the town of Testico, causing the vehicle to leave the road at high speed.

Kubica, who drives for the Lotus Renault team, was airlifted to the Santa Corona hospital in nearby Pietra Ligure where he underwent emergency surgery.

"Surgeons are trying to restore the functionality of his right hand," Kubica's manager Daniel Morelli told reporters outside the hospital.

"They have restarted the circulation of blood and repaired the bone structure. Now they have to think about the muscle functionality but Robert has a very strong character, he'll be OK."

Kubica's co-driver, Jakub Gerber, was unhurt in the incident, which occurred as he lost control of his car on a bend.

The impact saw the guard rail break the drivers' side door and cause the injuries to Kubica.

Italian media reported Sunday night that surgeon Igor Rossello was pleased with the outcome of the emergency surgery on the F1 star.

But he will spend the night in an induced coma and it will be some days before it is known if he will gain the full use of his hand.

Kubica, who has one grand prix victory to his name and finished eighth in last season's Formula One driver's standings, is no stranger to serious accidents during his motorsport career.

He had to undergo surgery to his left arm after an accident while driving in the Formula Three discipline in 2003 and also suffered a spectacular crash in the 2007 Canadian Grand Prix.

The first race of the 2011 Formula One season takes place in Bahrain on March 13 and it appears likely that reserve driver Bruno Senna will be called in to take Kubica's place.