F1 ace Kubica 'much better' after rally crash in Italy 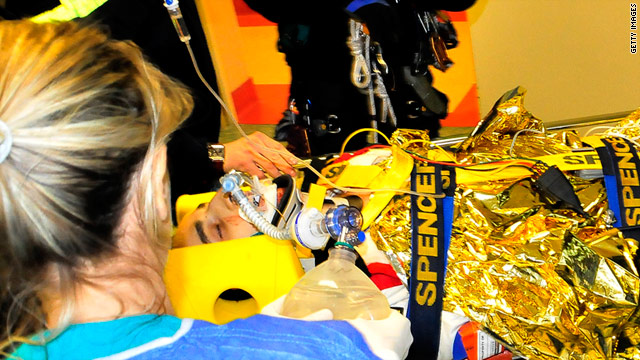 It took the emergency services more than one hour to cut Kubica from the wreckage of his Skoda Fabia.
STORY HIGHLIGHTS

(CNN) -- Robert Kubica's Lotus-Renault team said Monday that the F1 star was "much better" after undergoing emergency surgery in an Italian hospital following his crash while competing in a motor rally.

The 26-year-old Pole spent the night in an induced coma after a seven-hour operation to repair multiple fractures to his right arm and hand.

Kubica required several transfusions during the procedure to stabilize his condition after losing a lot of blood following the high-speed accident.

But in a statement on the team's official website, they said that Kubica had been briefly woken by doctors at the Santa Corona hospital in Pietra Ligure and was able to talk to his relatives.

"He was also able to move his fingers, which is an encouraging sign for the rest of the recovery process," it said.

We knew the risks and so did he. We didn't want a robot or a corporate man for a driver
--Eric Boullier
RELATED TOPICS

Dr. Mario Igor Rosello, the specialist who operated on Kubica, claimed the lack of swelling or infection on his right forearm was also a "good sign" but added it will be "several days before it is known if the operation is 100 per cent successful."

Kubica suffered multiple fractures to his right arm and leg after hitting a guard rail when he lost control of his Skoda Fabia during the Ronde de Andorra rally in Italy.

With the first race of the new Formula One season in Bahrain next month, his Lotus Renault team defended Kubica's decision to take part in a rally so close to the start of the season.

"He loves rallying," team boss Eric Boullier told Italian news agency Ansa. "We knew the risks and so did he. We didn't want a robot or a corporate man for a driver. It was agreed."

Kubica finished 2010 in eighth position and was due to start his fifth campaign as a first-choice driver, but there are now doubts as to whether the former Sauber driver will be fit to play any part in the 2011 campaign.

When asked about the length of time it could take for 2008 Canadian Grand Prix winner to recover, Rossello is reported by the BBC to have said, "One year. One year is the best provision."

Kubica also suffered fractures to his shoulder and elbow and Lotus Renault said the hospital would decide over the next few days if further operations were necessary on these injuries.

Support has been offered from throughout the close-knit world of F1 for the only Polish driver to have ever driven at this level, including a specially-designed "Twibbon" on the social-networking site Twitter.

Another driver to offer his sympathies was Williams' veteran Brazilian Rubens Barrichello, who used his Twitter blog to say, "I would like to ask you for your best wishes to Kubica," and "we all like him and he deserves all the best."

If Kubica is unable to take to the grid for the start of the season, Lotus Renault may choose to promote one of their two reserve drivers.

The team's two options are Bruno Senna, who raced for HRT in 2010, and Frenchman Romain Grosjean.

The 2011 Formula One season is set to get underway at Bahrain's International Circuit on March 13.