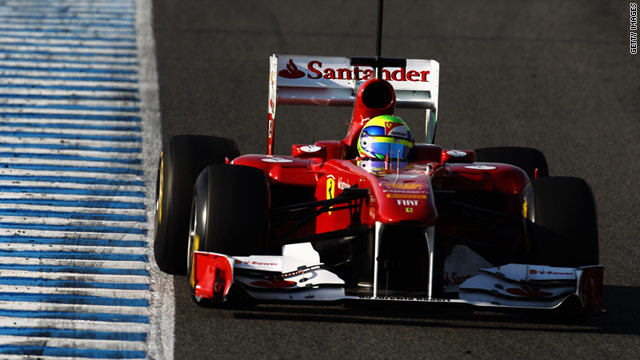 Felipe Massa was the quickest of the 12 drivers who took to the track on the opening day of pre-season testing.
STORY HIGHLIGHTS

(CNN) -- Ferrari's Felipe Massa proved the quickest of the 12 cars that took to the track on the opening day of Formula One pre-season testing in Jerez, southern Spain on Thursday.

Massa clocked a best time of one minute 20.709 seconds over 101 laps, seven tenths of a second quicker than rookie Sauber driver Sergio Perez of Mexico.

It was a performance that pleased the Italian, although he remained cautious, telling the official Ferrari website: "I am pleased. I was able to run continuously, without losing any valuable time.

"It doesn't really mean anything, because we don't know what trim the other drivers were running," added Massa.

Mark Webber's Red Bull was third fastest, a tenth of a second slower than Perez, while Toro Rosso test and reserve driver Daniel Ricciardo was an impressive fourth fastest.

I am pleased. I was able to run continuously, without losing any valuable time
--Felipe Massa
RELATED TOPICS

Thursday also saw the new McLaren take to the track for the first time, with former world champion Lewis Hamilton steering the MP4-26 to fifth place on its maiden outing.

Hamilton told McLaren's official website: "Today was mainly about checking the car -- not the most exciting day, but it was important to make sure everything was running OK.

"We didn't do any particularly long runs, and I wasn't too aggressive with the car, but we learned a couple of useful things today.

"The car feels good compared to last year's, which is positive. It feels like a good step over the MP4-25," added Hamilton.

Hamilton will stand aside for fellow-Briton Jenson Button on Friday, when he takes up testing duties.

Meanwhile, many of the drivers showed their support for Lotus Renault driver Robert Kubica, who remains in hospital in Italy after his horrific rallying crash on Sunday.

Kubica was quickest in Valencia last week and, in his absence, many teams wrote messages of support for him on their cars.

The Pole will undergo further surgery on his injuries on Friday, but his condition continues to improve and he was moved out of intensive care in Thursday. 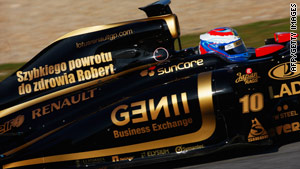 Team principal Eric Boullier told the official Lotus Renault website: "After a difficult few days, it's good for the team to be back at the track and to have our minds focused on developing the car.

"Things went pretty well but its early days and there is still so much for us to learn about the car."

Russian Vitaly Petrov steered the car to eighth position on the first day and will drive again on Friday -- before the team shift their focus to evaluating who will deputise for Kubica.

Reserve driver Bruno Senna and experienced German Nick Heidfeld are both due to test for the team over the weekend.

The new Mercedes failed to shine with Nico Rosberg managing only ninth position, ahead of the CNN-sponsored Team Lotus of Jarno Trulli in 10th place.