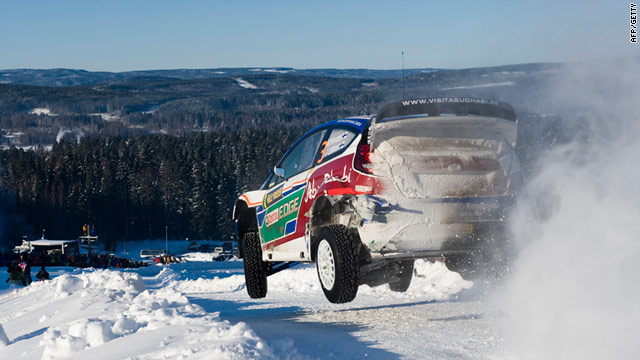 Mikko Hirvonen goes airborne in his Ford Fiesta on his way to victory in Sweden.
STORY HIGHLIGHTS

(CNN) -- Finland's Mikko Hirvonen led a Ford clean sweep of the podium in the Rally of Sweden, the opening round of the world rally championship.

Hirvonen, who won the corresponding race last season, showed his liking for the only rally of this status held solely on snow, with a commanding victory.

But the Frenchman had the consolation of claiming second in his Citroen on the inaugural Power Stage which has been introduced by organizers to boost interest in the series and is televised live.

Loeb's compatriot Sebastien Ogier claimed victory on the stage, which concluded the competitive action. It earned him three bonus points in the standings as he finished fourth.

The 30-year-old Hirvonen could afford to avoid mistakes in the final showdown as he took his 13th world rally championship victory after finishing runner-up to Loeb in the 2008 and 2009 title races.

"I was really nervous before the last stage but what a fantastic start from the team with the new car," Hirvonen told the official world rally website.

"The car has been quick straight away and after a tough season last year I am really pleased with this," he added.

Hirvonen had led going into the final day of the Karlstad-based race with just over 15 seconds dividing the first five drivers.

He was pushed all the way by 23-year-old Ostberg, who took the lead on Friday's opening stage and drove without error for his best career result alongside Swedish co-driver Jonas Andersson.

The championship now heads to Mexico for round two of the series from March 3-6.