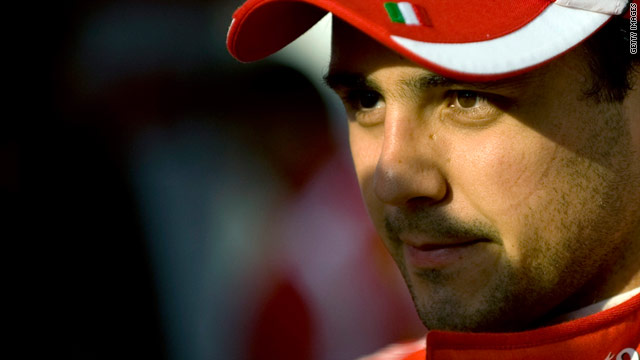 (CNN) -- Forget the immensely powerful car or the wealth of up-to-the-minute gadgets at his disposal, if Felipe Massa drives to Formula One glory this season it'll be thanks to his lucky pants.

The Brazilian, who drives for the Ferrari team, came agonizingly close to taking his first ever world title in 2008 but was pipped to the post by Briton Lewis Hamilton on the final lap of the final race of the season.

The following year he was lucky to survive after being hit on the head by a stray suspension spring that had flown from a rival's car during qualifying for the Hungarian Grand Prix.

But in 2011 he is hoping for no more obstacles as he guns for the world crown, with the help of his underwear.

"I have special underwear which I race in most of the time," he told CNN.

"[I wear them] just for the Saturday and Sunday I don't wash but, two days, what's the problem?" Massa replied.

His superstitions don't end there. He always lands on his right foot when he gets out of bed in the morning and makes sure the same foot enters his car first before a race.

"I think the superstition is just something that is inside your brain," he explained. "For sure, you would win because you have the underwear or because you are happy or whatever.

"You win because you are doing the best job, but inside your brain it is important to have everything clean and everything ready and that's why sporting people are superstitious."

With some impressive pre-season testing sessions under his belt many pundits are tipping Massa to muscle his way into the title reckoning in 2011, so could this finally be his year?

"Yes, I believe in my speed, I believe in the way I drive and I believe I can win many races and the championship. I think that's very important to have inside your brain, to be stronger and stronger all the time.

"And I know if I have all the possibilities and everything that is automatically for my driving style, for the way I drive I can be there."

After persistent problems with his car last season Massa thinks the new Pirelli tires to be used in the forthcoming campaign will benefit his racing style.

"Most of the problems I had last year should be alright for this year because the tires are much softer, to get the temperature in the tires it will be easier, so I expect not to have this problem, but we are a little bit early to say that.

I believe in my speed, I believe in the way I drive and I believe I can win many races and the championship
--Felipe Massa

"I like the tires, for sure. They're very different from last year, so maybe we are going to have more pit-stops because otherwise after some laps you are struggling a lot on the tires. So it's a big change for the championship, it's a big strategy change, but I enjoy it," he said.

Massa also rejects the oft-repeated notion that if he is to clinch a world title he will have to leave Ferrari in order to do so.

"I don't think so," he said. "I think I'm in a top team, it's important to have a top car and if I have that I will fight to the maximum level to be the champion.

"Ferrari is just the top in motorsport, it is a dream car on the road, for sure it is the most important thing. When you drive for a team like Ferrari it really is a dream come true."

Massa showed courage to climb back into a Formula One car just ten weeks after his life-threatening crash in Hungary but he insists he never dwells on what might have been.

"I never dream about the accident," he said. "What is important to say is that it was not my time. I believe in God, I am Catholic, so I'm sure it was not my time, it was a not the moment to go to a different life.

"There's nothing to say about that. When it's not your time, you know, you stay here."