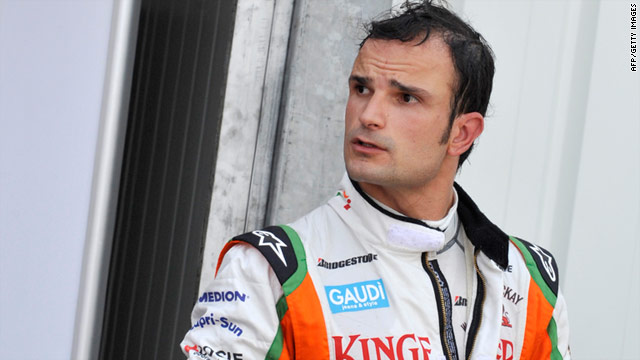 Vitantonio Liuzzi has been handed a drive with the Hispania Racing team, completing the F1 grid for 2011.
STORY HIGHLIGHTS

(CNN) -- The Hispania Racing Formula One team have confimed that Italian Vitantonio Liuzzi will drive for them in 2011, meaning all the race seats have now been filled for the forthcoming season.

Luizzi -- who drove for Force India from 2008 to 2010 before being released with a year still left on his contract -- will partner Narain Karthikeyan in Hispania's second season in F1.

After testing for the team in Barcelona in February, Liuzzi will again be at the helm of in March's Barcelona tests and will make his debut for the team at the Australian Grand Prix later this month.

Hispania principal Colin Kolles told the official team website: "I have known Tonio for many years as he raced with me in lower categories. He is a very professional driver who will bring a lot of benefits to the team.

"I am convinced about his skills to develop a car and his speed. He has shown this in the past having contributed to developing and moving a back grid car to the front.

"I had the pleasure of working with him and I am very happy and proud to have him racing with Hispania Racing," he continued.

Liuzzi himself added: "I am really happy to have signed this agreement with Hispania Racing. I never lost hope to be in Formula One as I know I have the experience and the right attributes for a young and ambitious team.

"I face a new challenge now and this excites me. I also face a lot of hard work in guiding Hispania Racing through the development of our new car."

It was the second successive day that Red Bull had set the fastest time after Australian Mark Webber went quickest on Tuesday.