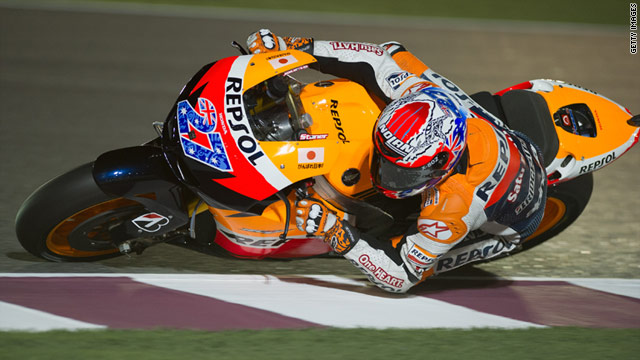 (CNN) -- Casey Stoner showed he will be a force to be reckoned with at new team Honda by dominating practice for the season-opening MotoGP event in Qatar on Friday, but seven-time world champion Valentino Rossi struggled as he seeks to replace the Australian at Ducati.

Repsol Honda claimed the three quickest times in the evening session at the Losail International Circuit, with Stoner's best of one minute 55:035 seconds heading off Spaniard Dani Pedrosa and Italian Andrea Dovizioso.

My shoulder bothered me a little. I wasn't as strong as I was yesterday, I could feel it
--Valentino Rossi
RELATED TOPICS

Rossi, who ended a seven-year stint with Yamaha at the end of a 2010 season marred by injuries, was eighth.

American Nicky Hayden, who also rode with Rossi at Honda earlier in his career, was back in 14th.

"Today was a bit difficult, because we had hoped to make a bigger improvement, but in the end we didn't lower our time enough," Rossi told the Ducati website.

"First of all, my shoulder bothered me a little. I wasn't as strong as I was yesterday, and in the end of the session, I could feel it. Also, we still don't know this bike perfectly and, as happened to us in the test, we get to a point where it's difficult to make a step forward with the set-up.

"We're missing half a second with our pace to be in the group where we hope to be Sunday. Anyway, today we tried two set-up solutions that were quite different, and we chose one that we'll try to refine tomorrow."

Stoner, the 2007 world champion in motorcycling's elite class, also set the fastest time in windy conditions in Friday's opening session of 1:55:457 as he again headed off Pedrosa, with Spies third.

Lorenzo was fifth despite the Spaniard suffering problems with his bike which limited his time on the track. Rossi was ninth, with Hayden just behind him.

Lorenzo's compatriot Alvaro Bautista has been ruled out of Sunday's race after the 26-year-old Suzuki rider suffered a broken leg when he crashed late in Friday's second session.

Qualifying will be held on Saturday evening Qatar time, with Sunday's race also at night at 1900 GMT.