Sizzling Stoner on pole for MotoGP season-opener in Qatar 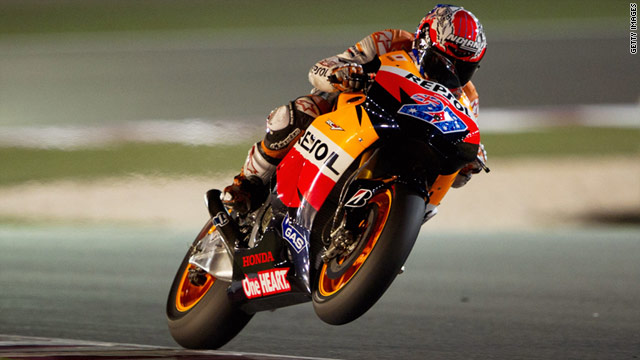 (CNN) -- Former world champion Casey Stoner claimed the 27th pole position of his career on Saturday to ensure he will start the new MotoGP season at the head of the grid in Qatar.

The Australian, who dominated the three practice sessions at Losail with his new Repsol Honda team, set the fastest time of one minute 54.137 seconds.

His teammate Dani Pedrosa will line up on the front row of the grid in Qatar for the first time on Sunday after finishing second, while Yamaha's reigning world champion Jorge Lorenzo took the final place -- 0.810 seconds behind Stoner.

Stoner is the only rider to have ever won from pole position in Qatar, doing so in 2009.

Lorenzo, who was runner-up last year after starting back on the grid, saw new young American teammate Ben Spies qualify in fifth behind Marco Simoncelli of the San Carlo Honda Gresini outfit.

Meanwhile, Bridgestone will continue to be MotoGP's tire supplier until 2014 after agreeing a new deal announced on Saturday, having been involved with motorcycling's elite class since 2009.