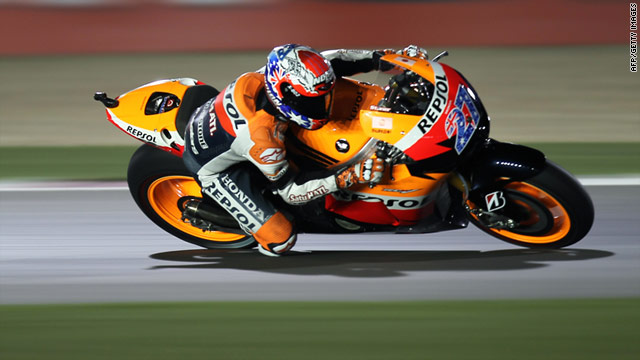 (CNN) -- New signing Casey Stoner became the first Honda rider to win the opening race of the MotoGP season since 2003 with his third victory in Qatar on Sunday.

The Australian emulated seven-time world champion Valentino Rossi's effort as he triumphed after starting in pole position -- he is the only motorcyclist to have ever won at the Losail circuit after qualifying fastest, repeating his 2009 feat.

Rossi, who replaced Stoner at Ducati after leaving Yamaha, finished back in seventh in his debut race for the Italian team.

Stoner on pole for MotoGP season-opener in Qatar

Stoner, the 2007 world champion and a winner in Qatar the following year, also started last year's race from pole but crashed on lap six.

This time, however, he let teammate Dani Pedrosa pass him early on, while his fellow Spaniard Lorenzo also took the lead during the 22-lap event.

Stoner, who dominated the practice sessions before topping qualifying, made his move at the halfway stage to leave last year's championship rivals to battle over the podium places as he clinched his 24th race win in motorcycling's elite class.

"I couldn't have dreamt of a better start to the season, but I'm not going to get carried away and will continue to work," he told reporters.

"The first lap was very tough because of how my bike reacted with a full tank. Afterwards it was much better, and the bike improved with every lap until the end."