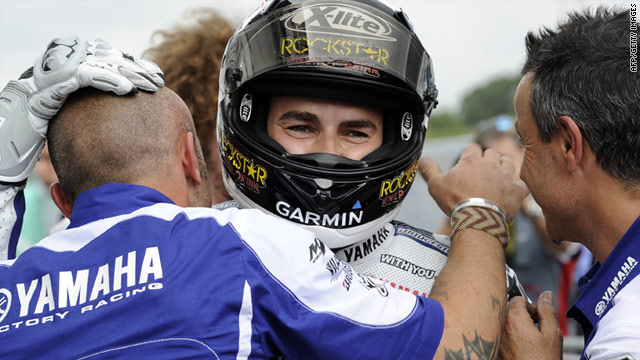 Jorge Lorenzo is congratulated by his Yamaha teammates after securing his first pole of the 2011 MotoGP season at Estoril.
STORY HIGHLIGHTS
RELATED TOPICS

(CNN) -- Reigning world champion Jorge Lorenzo will start on pole for Sunday's Portuguese MotoGP after heading qualifying at the Estoril circuit on Saturday.

It was the Yamaha driver's first pole of the 2011 season and the fourth time in a row that he has claimed pole position at the track.

The Spaniard's time of one minute 37.161 seconds was just over a tenth of a second faster that Italy's Marco Simoncelli, who will start Sunday's race in second place.

Lorenzo currently leads the MotoGP championship by nine points from his compatriot Pedrosa with Casey Stoner currently in third -- 20 points behind the 2010 champion.

Nicky Hayden is in fourth place in the standings, while Rossi is fifth.