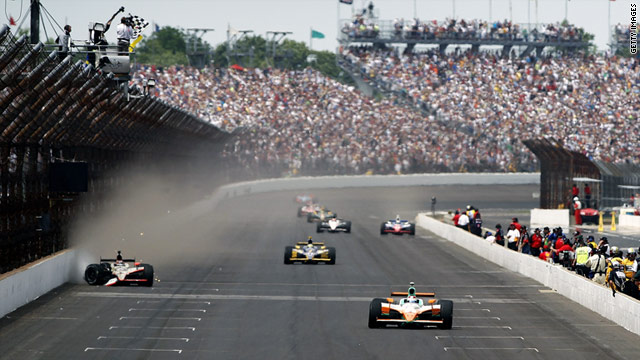 (CNN) -- Dan Wheldon won the Indianapolis 500 Sunday, making a mad dash past rookie J.R. Hildebrand in the last stretch of the race.

Hildebrand crashed at the end, almost winning the race by sliding on three wheels.

Wheldon dashed past Hildebrand to take the championship, in the 100th year of the iconic race.

Drivers had to deal with a new rule that some said could increase the risk of crashes.

The new regulation forces cars to line up in a side-by-side alignment during restarts.

That differed from the past, when cars lined up in single file for restarts. The new double-file formation claimed its first victim 27 laps into the race as E.J. Viso was knocked out after bumping two cars.

Danica Patrick, another big draw at the race, finished in 10th place.

She led the race for several laps toward the end of the race but she got passed and then had to make a pit stop.

Patrick became a legend when she was a rookie driver at the oval in Indiana in 2005.

During a thrilling dash in that race, she became the first woman to lead a lap at Indy. She ended in fourth place and has finished in the top eight in five of her six Indy 500s, including a sixth-place finish last year.

Patrick has been dogged with speculation that she may leave the IndyCar Series soon to concentrate on NASCAR.

She did not confirm whether she is leaving the Indy series during interviews earlier this week.

"I suppose anything is possible. But I know for me I haven't made any of those decisions yet," Patrick told reporters who asked if this is her last Indy 500.

"This is a special event in and of itself. Indy is my favorite race in the world. So many people have that story as to how they could have maybe won the Indy 500, which for me is the ultimate goal."