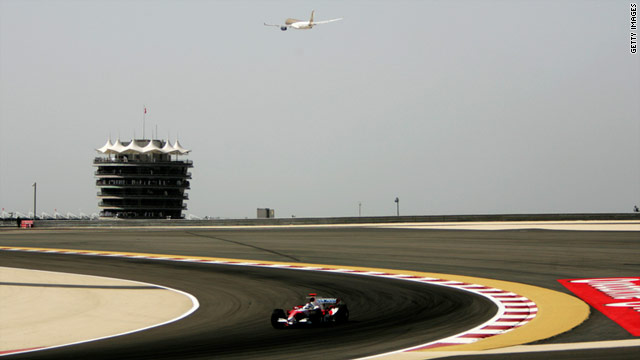 Bahrain's international circuit will see no Formula One racing this year after organizers abandoned plans to reschedule the race.
STORY HIGHLIGHTS

(CNN) -- The Bahrain Grand Prix will not go ahead after organizers said Friday that they had abandoned plans to re-schedule the race later this year.

Bahrain were to host the opening race of the 2011 Formula One season on March 13, but it was postponed on February 21 after civil unrest in the gulf kingdom.

Last week, the World Motor Sport Council re-instated the race and gave it a provisional date of October 30.

The decision drew widespread criticism and former FIA president Max Mosley told CNN Tuesday that he would be "astonished" if the race proceeded.

The Formula One Teams Association also confirmed to CNN Tuesday that they had written to world governing body the FIA, Formula One commercial boss Bernie Ecclestone and the Bahrain International Circuit to express their views on the issue.

The Bahrain circuit's chairman Zayed R Alzayani confirmed their decision in a statement on their official website Friday.

It read: "Whilst Bahrain would have been delighted to see the grand prix progress on October 30th in-line with the World Motor Sport Council's decision, it has been made clear that this fixture cannot progress and we fully respect that decision.

"Bahrain has absolutely no desire to see a race which would further extend the calendar season detract from the enjoyment of F1 for either drivers, teams or supporters," he said.

The inaugural Indian Grand Prix, scheduled for the October 30 slot at a new circuit on the outskirts of New Delhi, was set to be pushed back to December but can now go ahead on its original date.

About 30 people have died during protests in Bahrain, according to figures from the government, opposition figures and human rights groups.

Opposition and human rights groups say the government has detained more than 1,000 people.

A state of emergency was lifted last week and Bahrain Grand Prix organizers remain hopeful that they can stage a race in 2011.

"We look forward to welcoming teams, their drivers and supporters back to Bahrain next year," read the statement.