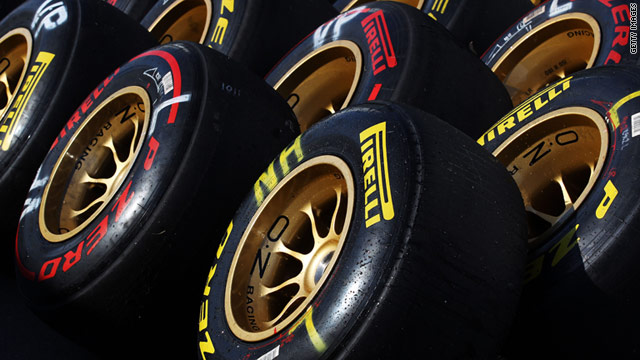 Italian tire manufacturer Pirelli returned to Formula One for the 2011 season.
STORY HIGHLIGHTS

(CNN) -- Formula One teams will face a different challenge at this weekend's European Grand Prix as a new tire compound will be used in a race for the first time.

Official supplier Pirelli announced on Tuesday that the medium and soft tires will be used for the event in the Spanish port city of Valencia.

The Italian firm's motorsport director Paul Hembery said the decision was a result of the track surface on the street circuit and also the likelihood of warm weather.

"Tire wear on this circuit is likely to be quite high because of the track layout, the nature of the surface, and also the weather conditions," Hembery told Formula One's official web site.

Tyre wear on this circuit is likely to be quite high because of the track layout, the nature of the surface
--Paul Hembery
RELATED TOPICS

"For all these reasons, we've selected the medium and soft tires, which should provide the teams with a good level of resistance, plenty of different opportunities for strategy and about a second per lap difference between the compounds."

Although the medium compound was not used in any of the 2011 season's opening seven races, the teams did get a chance to test it during a Friday practice session ahead of the Canadian Grand Prix.

Mike Gascoyne, chief technical officer for the CNN-sponsored Team Lotus, was satisfied with what he saw from the medium tire in Montreal and is hoping his drivers can take advantage of the speed difference between the two available compounds.

"The prime tire here is the medium which we are racing for the first time this season," the 48-year-old said.

"We ran it in on Friday in Canada and it behaved pretty well ... We will be looking closely at how it performs and how we can take advantage of the time difference between the primes and the options on Saturday and Sunday."

Pirelli took over from Bridgestone as the sole tire supplier to the elite division of motorsport at the end of 2010.