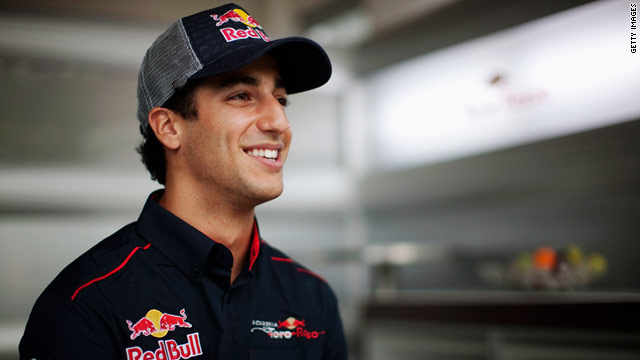 Daniel Ricciardo is set to drive for Formula One outfit Hispania for the rest of the season.
STORY HIGHLIGHTS

(CNN) -- Australian rookie Daniel Ricciardo is set to make his Formula One debut at the British Grand Prix after signing a deal with Spanish team Hispania.

Ricciardo, who turns 22 on Friday, has been a test driver for the Red Bull and Toro Roso teams but will now take his place on the grid at Silverstone on July 10.

He replaces Narain Karthikeyan, though the Indian driver is likely to return for the inaugural race in his home country, in Delhi on October 30.

Ricciardo will team up with Italian Vitantonio Liuzzi to complete Hispania's line-up, and try to help the Spaniards record their first points of the season.

"It's a dream come true for me -- for the first time on an F1 starting grid," he told the team web site.

"I had to pinch myself a couple of times to be sure that it's real. I'm excited and can hardly wait to drive at Silverstone. It's a new challenge, a new experience, a new team, but I'm ready and will give of my best in any event."

Jose Ramon Carabante, Hispania's team boss, said he hoped the deal would mark the start of a strong partnership with Red Bull.

"This agreement is a reward for all the hard work Hispania Racing has shown since we started in Formula One last year," he said.

"We're proud that the Formula One world champion team has trusted us in their effort of developing their drivers. Let's hope that this is just the start of a fruitful relationship."

Meanwhile, Formula One's governing body, the International Automobile Federation (FIA), has agreed to delay the use of new 'greener' engines in the sport until the start of the 2014 season.

The teams will switch from V8 engines on their cars to a V6 1.6 liter turbo variety, complete with energy recovery systems that go beyond the current KERS (Kinetic Energy Recovery System) technology.