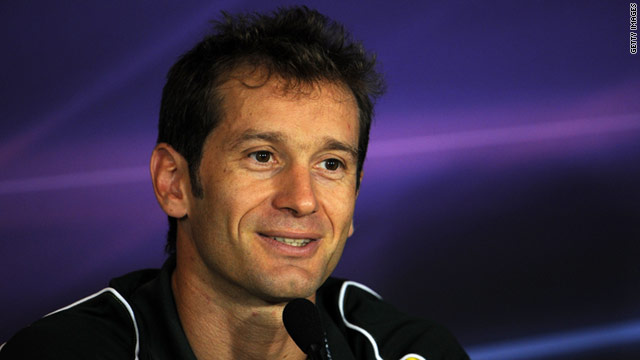 Italian driver Jarno Trulli made his Formula One debut at the 1997 Australian Grand Prix.
STORY HIGHLIGHTS

(CNN) -- The CNN-sponsored Team Lotus have announced veteran Italian driver Jarno Trulli will stay with the Formula One outfit for the 2012 season.

Trulli, 37, joined the team in 2010, the same year in which the Malaysian-owned team purchased the rights to race under the historic Lotus name.

The Italian, who has been in the elite division of motorsport for 14 years, is yet to score a point for the British-based team despite having completed 20 grands prix, but Trulli was happy to have extended his stay with Lotus.

"I am very pleased that we have been able to confirm today that my contract with Team Lotus has been extended into 2012," the former Toyota racer said in an official Lotus statement.

"The challenge I first accepted when I joined the team is becoming more exciting every day, and I am very proud that I can keep helping the team take steps forward for at least another year."

"We are all delighted that we have been able to reach an agreement to keep Jarno on board for at least one more year with our team," Fernandes said.

"He has shown in qualifying in Monza just how much pace he has and how he can wring every last drop of performance out of his car.

"Since day one with us he has brought a level of professionalism, insight and raw speed to our team that has helped accelerate our development on and off track."

Trulli qualified in 19th position for his home grand prix at Monza on Sunday and managed to improve by five places to claim 14th at the checkered flag.

The one-time Renault driver will be on the grid for the Singapore Grand Prix, the next round of the championship, on September 25.