Djokovic and Ivanovic give Serbia a perfect start in Perth 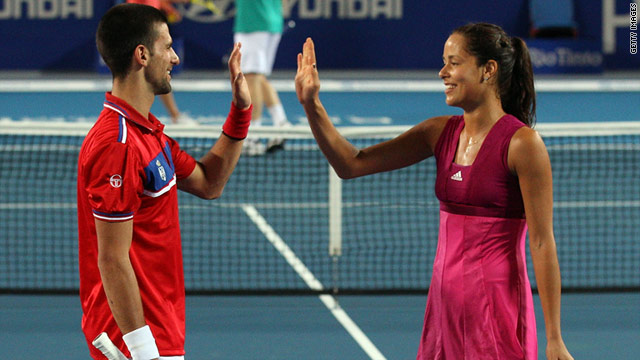 (CNN) -- Novak Djokovic and Ana Ivanovic began their build-up to the first grand slam tournament of 2011 with a winning start to the Hopman Cup mixed teams event in Perth on Sunday.

The top-seeded Serbians crushed Kazakhstan's Yaroslava Shvedova and Andrey Golubev 3-0 in the second Group A tie of the Australian indoor hardcourt competition.

The Serbians then won the doubles 7-6 (7-2) 6-4 to earn maximum points ahead of Tuesday's clash with Australia's Alicia Molik and Lleyton Hewitt and Thursday's encounter with Belgium's third-seeded Justine Henin and Ruben Bemelmans.

"It was so hard for us to hold serve in the first set, but I was just happy I managed to close it out in the tiebreak because it was a close one," Ivanovic, who climbed back up to 17th in the rankings after an encouraging end of 2010, told the tournament's official website.

What were the top tennis moments of 2010?

"I actually managed to get my serve a little better in the tiebreaker and then in the second set. It was just good to go out there, keep moving and have that pressure of a match again.

"In the second set it was good and I was being a lot more aggressive, but in the first set I was very passive and playing lots of balls short. I tried to change that in the second set, and it got better."

I'm just happy to not embarrass Ana because she is playing really great. I was just trying because I wanted to make her happy
--Novak Djokovic
RELATED TOPICS

Djokovic, seeking to add to his sole major win at the Australian Open in Melbourne later this month, was relieved after seeing off a testing challenge from 36th-ranked Golubev.

"I don't want to find any excuses, but we got here just two days ago and it's very hard to get used to the time change and the conditions here," said Djokovic, whose main Australian Open rivals Rafael Nadal and Roger Federer faced each other in Abu Dhabi on Saturday, with the Spanish No. 1 prevailing in the final of the exhibition event.

"All in all, I'm just happy to not embarrass Ana and bring her one point because she is playing really great. I was just trying because I wanted to make her happy.

"We have known each other since we were five and we played all the junior events that you can imagine, and we have a great relationship. She's the nicest girl I know in tennis and for me she's the best in the world."

The Mahut-Isner men's rubber will be a rematch of their titanic clash at Wimbledon last year, when the big-serving U.S. player won the longest match in tennis history.

At the Brisbane International singles tournament, Spanish sixth seed Feliciano Lopez and No. 8 Denis Istomin of Uzbekistan won their first-round matches on Sunday.

Other season-opening tournaments this week include the men's Qatar Open and the women's Auckland Classic in New Zealand, featuring top seed Maria Sharapova.