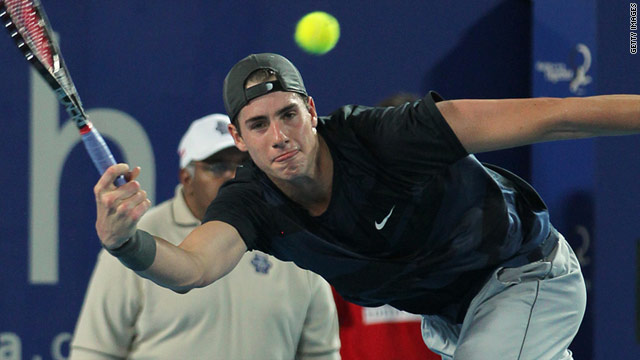 (CNN) -- When John Isner played Nicolas Mahut in 2010, the American finally staggered off the court victorious -- 11 hours and a staggering 168 games later in the longest match in tennis history.

But his 2011 reunion with the Frenchman proved to be a relatively brief encounter, with the world No. 19 registering a routine straight-sets win in a brisk 90 minutes on Monday.

The 25-year-old, who edged the June marathon at Wimbledon with a 70-68 win in the final set, was relieved after rattling off a 6-3 7-6 (7-5) result at the Hopman Cup mixed teams event in Australia.

"If I'd lost that second set it might have gone for four hours," he joked on the tournament's website."So I was lucky to finish it in two.

"First match of the year, I'm pretty pleased with how I played. I got on top of him early in the first set and then the second set he picked his game up and I kind of just stayed the course with mine."

Isner's win gave the U.S. an unassailable 2-0 lead in the Group A tie against France following Bethanie Mattek-Sands' 3-6 6-3 6-1 victory over 17-year-old Kristina Mladenovic.

The Americans, seeking their country's sixth title in Perth, followed that up by winning the doubles rubber 2-6 6-3 10-8 to clinch a 3-0 victory and take top spot from Italy's Francesca Schiavone and Potito Starace in the round-robin standings.

French Open champion Schiavone battled to a 7-5 6-3 win over 16-year-old Robson in the opening match, then world No. 4 Murray leveled the tie as he beat Starace 7-5 6-1 despite struggling with the high temperatures.

"I didn't feel very fit today," he said. "I was breathing so hard after four or five games, so hopefully that will improve over the next couple of weeks.

"That's the goal, to try to beat those guys in the big events and try to win my first grand slam."

Kazakhstan's Yaroslava Shvedova has been forced to withdraw from the competition after suffering a knee injury in Sunday's defeat by Serbia's Ana Ivanovic.

The 23-year-old, who has been replaced by Sesil Karatantcheva, may now miss the Australian Open, which starts on January 17 in Melbourne.

Belgium's Justine Henin and Ruben Bemelmans will seek to build on Saturday's 2-1 win over Australia.

Meanwhile, Russian star Maria Sharapova eased into the second round of the ASB Classic in Auckland, New Zealand with a 6-2 6-3 success against Italian lucky loser Alberta Brianti on Monday.

Sharapova was set to face fifth-seeded Spaniard Carla Suarez Navarro in the opening match of the hardcourt tournament, but the draw was rearranged after Latvia's Anastasija Sevastova withdrew through illness.

Another big name to advance at the ASB Tennis Center was top seed Sharapova's compatriot Svetlana Kuznetsova, who overcame local favorite Sacha Jones with a 6-4 6-2 win.

Third seed Kuznetsova, who finished last season outside of the top 10 for the first time in seven years, praised the efforts of her 20-year-old opponent.

"For almost the whole first set I had to watch and adjust to how she was playing," the 25-year-old told the WTA Tour's official website.

"She had the home crowd, I had never played her before and had no idea what to expect. In the second set I was able to put more pressure on her."

The second-seeded American, ranked eighth in the world, sealed his win in just 72 minutes to set up a second-round clash with Ukraine's Alexandr Dolgopolov.

In the women's draw, Australian top seed Samantha Stosur delighted the home crowd with a 7-6 (7-1) 6-1 success over Czech Lucie Hradecka.

It was a day of contrasting fortunes for Stosur's main rivals, as Shahar Peer and French fourth seed Marion Bartoli both advanced while No. 3 Nadia Petrova crashed out.