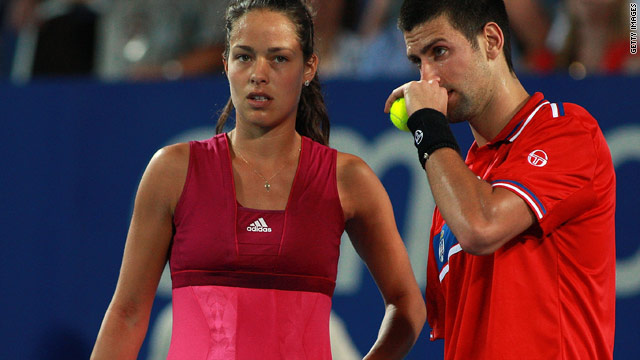 Serbia will be replaced by Belgium in Saturday's Hopman Cup final after Ana Ivanovic picked up an injury.
STORY HIGHLIGHTS

(CNN) -- Top seeds Serbia have been forced to withdraw from Saturday's Hopman Cup final because of an injury to former world number one Ana Ivanovic.

The 2008 French Open champion tore a stomach muscle during her straight sets loss to Justine Henin of Belgium at the annual team event in Perth, Australia on Thursday.

Ivanovic went on to partner Novak Djokovic in a three-set mixed doubles loss to Henin and partner Reuben Benelmans, but after practicing on Friday morning made the decision to withdraw from the tournament.

"This morning, I was playing some points and on one serve I felt a sharp pain and I couldn't even hit or move after that," Ivanovic told reporters.

Ivanovic and world number three Djokovic -- whose singles win over Benelmans on Thursday secured Serbia's final berth -- will be replaced in the weekend's title-clash by Belgium who finished in second place in group A.

Henin and Bemelmans will now face the United States team of Bethanie Mattek-Sands and John Isner in the final, after Mattek-Sands's straight sets defeat of British teenager Laura Robson on Friday was enough for the American's to secure their place at the top of group B.

The injury is an early-season blow for Ivanovic, who recently made a comeback to the WTA tour following a string of fitness problems.

But the 23-year-old said she can recover in time for the first grand slam of the year, the Australian Open, which begins in Melbourne on January 17.

It's very frustrating. But I have to stay positive
--Ana Ivanovic
RELATED TOPICS

"It's definitely a scare," the current world number 17 told reporters. "At this moment in time my chances are still very good because I stopped in time. I'm positive I will be fit.

"It's very frustrating because this has been the case for a long time now. But I have to stay positive."

Reigning French Open champion Francesca Schiavone was also forced to retire from her Hopman Cup singles match against France's Kristina Mladenovic on Friday, however, it is not thought her injury is serious.

Elsewhere, at the Brisbane International top seed Robin Soderling of Sweden progressed to the semifinal of the Australian Open warm-up event on Friday.

The 26-year-old brushed aside Aussie qualifier Matthew Ebden in straight sets and will now face Czech Radek Stepanek in the semifinal, after the former world number eight and two-time finalist of the Brisbane event put out seventh seed Florian Mayer 6-3 6-3.

In the women's singles draw Germany's Andrea Petkovic caused an upset by knocking out the tournament's fourth seed, Marion Bartoli of France in straight sets.

Hungary's Arn will meet second seed Yanina Wickmayer of Belgium in the final of the event, after the world number 23 overcame the challenge of Chinese qualifier Peng Shuai 3-6 7-6 6-3.

In the Hong Kong exhibition tournament, Venus Williams suffered a second straight defeat in her preparations for the Australian Open after a lengthy injury layoff.

Williams, beaten by Vera Zvonareva on Thursday, went down in straight sets to Li Na of China, 6-3 7-6.