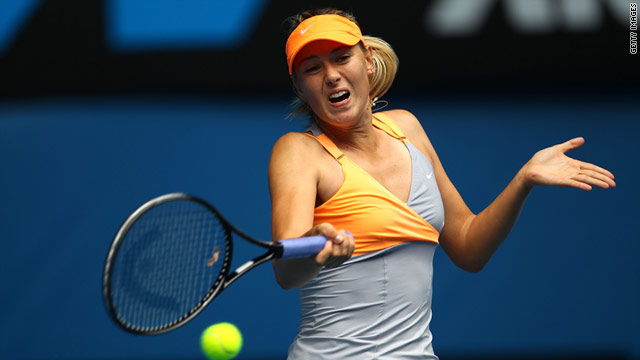 A determined looking Maria Sharapova powers a forehand during her win in Melbourne.
STORY HIGHLIGHTS

(CNN) -- Maria Sharapova put memories of her first round defeat at last year's Australian Open firmly behind her with a convincing opening victory over Tamarine Tanasugarn of Thailand.

Former champion Sharapova was shocked by fellow Russian Maria Kirilenko in 2010 as she struggled to find her best form after shoulder surgery, but all that was forgotten with a 6-1 6-3 victory at Melbourne Park on Monday.

Given the first slot again on the showpiece Rod Laver Arena, Sharapova dropped the first game to love after serving two double faults and admitted thoughts of her loss last year were at the back of her mind.

"I was definitely a little bit nervous in the first game," Sharapova told the official Australian Open website.

"Last year I played first match on center and lost. I really didn't want that to happen again. In the middle of the first set, I started swinging a little bit."

Should the Australian Open be played in February?

The 14th seed then reeled off the next six games to take the opener in just 25 minutes. Sharapova trailed 3-1 in the second set before a run of five straight wins enabled her to close out a comfortable win.

Top seed Caroline Wozniacki of Denmark also came through a tough-looking opener against Argentina's Gisela Dulko, the world number one in doubles.

Wozniacki won 6-3 6-4 in one hour 40 minutes, putting an early defeat at last week's WTA tournament in Sydney behind her as she bids for her first grand slam title.

With defending champion Serena Williams absent through injury, her sister Venus Williams is hoping to keep the title in the family and the fourth seed made a convincing start, beating Italian Sara Errani 6-3 6-2 in their first round match.

Henin, who has been sidelined with an elbow injury told the official website: "I think I need this kind of match to really get into the tournament like I want to be and at my best level."

Clijsters, looking to win back to back grand slams after retaining the U.S. Open title, has a difficult first round match Tuesday against former world number one Dinara Safina.