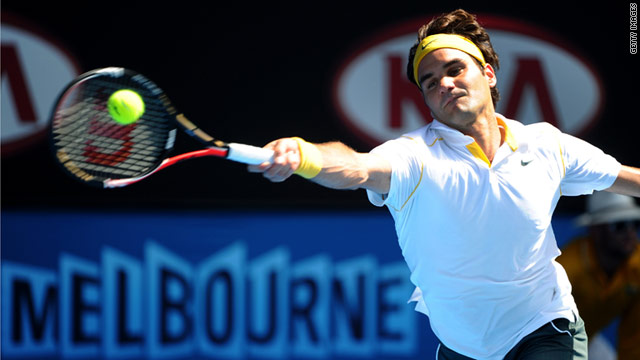 The 29-year-old secured a 6-3 6-3 6-1 victory over the Belgian to earn his 57th win in Melbourne and take him past previous record-holder Stefan Edberg.

World No. 2 Federer, a four-time winner of the event, said he was pleased to break Edberg's Open era record, but he admitted the retired Swede is still someone he looks up to.

"It's very nice, but he still stays my idol," Federer, who shares the record of five final appearances with Edberg, told the tournament's website.

The 16-time major champion -- also a record -- was happy with his performance following a testing five-set clash with Gilles Simon on Wednesday.

It's very nice, but he still stays my idol
--Roger Federer on Stefan Edberg
RELATED TOPICS

"I'm happy I was able to come through it. It's surely not the easiest thing to come back after a five-setter, but I managed. I'm sure that another day of rest is going to do me good."

Third seed Novak Djokovic is into the fourth round after his Davis Cup teammate Viktor Troicki was forced to retire from their clash.

"He obviously tried his best," Djokovic said of Troicki on the ATP Tour's website.

"It's the third round of a grand slam. It's not the way you want to finish the tournament, definitely. It's sad for him, but I have to move on."

Berdych equaled his best performance at the tournament with his 6-2 7-6 (7-3) 6-2 victory over the French 28th seed, and he will meet fellow top-10 player Fernando Verdasco in the last 16.

Spanish ninth seed Verdasco, who reached the semifinals in Melbourne in 2009, overcame Kei Nishikori of Japan 6-2 6-4 6-3.

American eighth seed Andy Roddick fell one set behind in his match with Dutchman Robin Haase before he won a second-set tie-break and consequently the contest 2-6 7-6 (7-2) 6-2 6-2.

On Saturday, world No. 1 Rafael Nadal continues his bid to hold all four grand slam titles as he plays 199th-ranked Bernard Tomic of Austria in the third round.