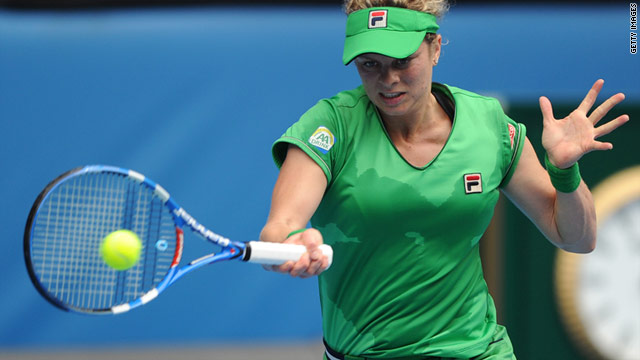 (CNN) -- World No. 3 Kim Clijsters remains on course to win a second consecutive grand slam singles title after overcoming a challenge from Agnieszka Radwanska to reach the semifinals of the Australian Open.

The U.S. Open champion battled past 12th seed Radwanska of Poland 6-3 7-6 (7-4) in Wednesday's quarterfinal to reach the last four in Melbourne for the sixth time in her career.

The Belgian third seed will face world No. 2 Vera Zvonareva on Thursday for a place in the final -- a repeat of September's title clash at Flushing Meadows.

Zvonareva, runner-up at the last two grand slams after also losing to Serena Williams in the Wimbledon final, took just over an hour to dispatch of Czech 25th seed Petra Kvitova 6-2 6-4.

The Russian second seed was full of praise for her 20-year-old Czech opponent, who knocked out home favorite and world number five Sam Stosur on her way to her second grand slam quarterfinal, matching her feat at Wimbledon in 2010.

Everything has to be better. I'm in the semifinals and I don't feel I've played my best, so that's a good thing
--Kim Clijsters
RELATED TOPICS

"At 6-2 3-0 I was trying to keep playing the same way I was playing, but she really lifted her game," the 26-year-old Zvonareva told reporters.

"She's a very good player. She took that opportunity, that little chance I gave her, and used it to get back into the match. I'm happy with the way I handled the situation during those moments, though."

Clijsters, meanwhile, faced arguably her toughest test so far in world No. 14 Radwanska, who was playing in her first tournament for three months following a foot injury.

But despite losing a 4-1 lead in the first set and going down a break of serve early in the second, the more experienced Clijsters closed out the match to make the semifinals in Australia for the first time since her brief period of retirement from the game in 2008.

"I felt a little bit tired and heavy out there today, but I fought well and stayed really focused, and tried not to lose too much energy on getting frustrated," the mother-of-one told the official WTA Tour website.

The 27-year-old admitted that she would have to improve in order to add the Australian Open title to the three grand slam singles crowns she has already won in New York in 2005, 2009 and 2010.

"Everything has to be better. The serving, the returning, the unforced errors -- everything. But I'm in the semifinals and I don't feel I've played my best tennis, so that's a good thing," she said.

"I'm hanging in there. Sometimes it's more of an achievement than winning your matches very easily."

In Thursday's other semifinal, world number one Caroline Wozniacki will play Chinese ninth seed Li Na after the pair both won their quarterfinal matches on Tuesday.

Denmark's Wozniacki is attempting to claim her first major title, while Na -- who also reached the last four in Melbourne last year -- hopes to become the first woman from her country to reach a grand slam final.

Check out the unique sights and atmosphere of Melbourne Park, home of the Australian Open.
Top 10 Oz Open moments

CNN's Candy Reid looks back over the first week of action from the Australian Open to pick her favorite moments.
Oz Open: Nomad to nouveau riche

The Australian Open has come a long way from its formative years - Open Court gives the lowdown on the world's richest slam.
The fashion verve of Venus

Venus Williams has a reputation for her striking fashion sense, and her 2011 wardrobe looks provocative as ever ...
Federer to help flood victims

Tennis superstar Roger Federer is hoping to help the victims of the Australian floods by setting up a fund-raising event this weekend.