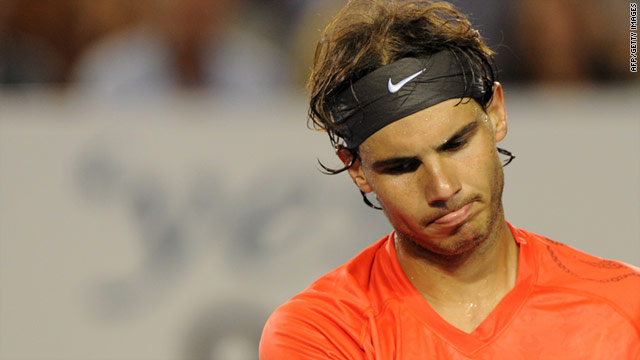 Rafael Nadal was bidding to become the first man since Rod Laver in 1969 to hold all four grand slam titles at once.
STORY HIGHLIGHTS

(CNN) -- Top seed and world number one Rafael Nadal of Spain has been knocked out of the Australian Open by compatriot and "friend" David Ferrer.

Hampered by a thigh strain from the start of Wednesday's quarterfinal, the nine-time grand slam champion was visibly suffering as he went down 6-4 6-2 6-3 at Melbourne's Rod Laver Arena to his Davis Cup teammate.

Ferrer's triumph -- his fourth over Nadal from 15 encounters -- will now see the 28-year-old play in just his second grand slam semifinal, following his appearance in the last four of the U.S. Open in 2007.

The world number seven will face Britain's Andy Murray for a place in the final of the opening grand slam of 2011, after the world number five beat unseeded Ukrainian Alexandr Dolgopolov in the earlier match.

Nadal was clearly affected by a thigh problem during the match but, despite receiving off-court treatment after just the third game, refused to blame the loss on his injury.

The Mallorcan was instead full of praise for his opponent, who broke serve in the opening game on his way to taking the first set, when his spoke to reporters after the match.

"For respect to the winner and to a friend, I prefer to talk about the match," Nadal said.

I really couldn't do more. He played at a very high level, and I wasn't able to compete against him tonight
--Rafael Nadal

"It is obvious that I didn't feel at my best. I had a problem during the match, at the very beginning. I really couldn't do more than what I did. He played at a very high level, and I wasn't able to compete against him tonight."

Nadal showed flashes of his usual brilliance but any chance of a comeback in the second set was suppressed by Ferrer, who after a 10-minute break in proceedings for an Australia Day fireworks display, secured a double break of serve to lead the match by two sets to love.

Ferrer then raced to a 3-0 lead in what was to be the third and final set, before wrapping up the ultimately one-sided contest in just over two and a half hours.

"I just congratulate him and wish him all the best for the semifinal. I think he's doing a fantastic tournament," Nadal added. "If he keeps playing like this, he's going to have a good chance."

But Ferrer, who is unbeaten so far this season having won the Australian Open warm-up tournament in Auckland, New Zealand, said he could not be complacent if he wants to beat the in-form Murray.

"I played very consistently all the three sets and I was focused just in my game. I want to enjoy this moment," Ferrer told the official ATP Tour website.

"I will try to do my best, but I need to play very consistently, stay very focused all the match, because Andy's a top player."

Murray dropped his first set of the tournament so far to world number 46 Dolgopolov, before eventually winning 7-5 6-3 6-7 6-3.

The 22-year-old Dolgopolov has been a revelation in Australia, defeating 2008 runner-up Jo Wilfred Tsonga and two-time French Open finalist Robin Soderling on the way to his first grand slam quarterfinal.

"I thought I dealt with his game well. It was just difficult to get into a rhythm. I did quite a lot of running," Murray said.

It was a tough match. I thought I dealt with it pretty well
--Andy Murray
RELATED TOPICS

"He won a lot of free points off his first serve. It was a tough match. I thought I dealt with it pretty well."

Murray is aiming to reach his second consecutive final in Melbourne after losing to Roger Federer in 2010, and the third grand slam final of his career after also facing the Swiss in the 2008 U.S. Open final.

But the 23-year-old, who is also trying to become the first Briton to win a major title since Fred Perry in 1936, conceded that his quarterfinal opponent could prove a threat to him in future competitions.

"With his game style, he's going to give a lot of guys problems. He might be a little bit inconsistent from time to time but when his game's on, I'm sure he'll get deep into grand slams and the big tournaments just because of how tricky his game is," the Scot added.

In the other semifinal defending champion Roger Federer will play third seed Novak Djokovic, after both made it through their quarterfinal ties on Thursday.

World number two Federer is aiming to claim his 17th grand slam title, while the 23-year-old Serb is gunning for his second after winning in Australia in 2008.

Check out the unique sights and atmosphere of Melbourne Park, home of the Australian Open.
Top 10 Oz Open moments

CNN's Candy Reid looks back over the first week of action from the Australian Open to pick her favorite moments.
Oz Open: Nomad to nouveau riche

The Australian Open has come a long way from its formative years - Open Court gives the lowdown on the world's richest slam.
The fashion verve of Venus

Venus Williams has a reputation for her striking fashion sense, and her 2011 wardrobe looks provocative as ever ...
Federer to help flood victims

Tennis superstar Roger Federer is hoping to help the victims of the Australian floods by setting up a fund-raising event this weekend.