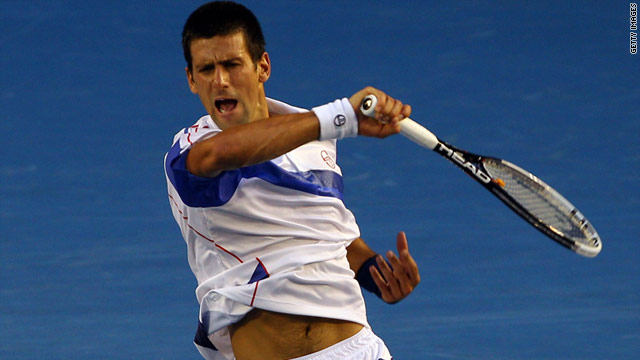 Novak Djokovic says that Wimbledon is the most important tournament of the year.
STORY HIGHLIGHTS

(CNN) -- Australian Open champion Novak Djokovic said Wimbledon is next on his hit list as he aims to break the long-standing dominance of Roger Federer and Rafael Nadal.

The Serbian crushed Britain's Andy Murray at the final in Melbourne to claim his second Grand Slam title after winning the Australian Open back in 2008.

On Thursday he announced he will play in the AEGON Championships at Queen's Club in London, where he lost to Rafael Nadal in an epic final in 2008.

Djokovic said the Championships are vital preparation for Wimbledon, which he called the most important tournament of the year.

"The AEGON Championships is one of the nicest tournaments around," Djokovic told the British Lawn Tennis Association website.

"The Queen's Club has got great grass courts, it's a great atmosphere with always a packed house of spectators, and you just feel good there.

"Rafa and I had an incredible match in the Queen's final in 2008 and it was the closest I ever got to a grass court title.

"Wimbledon is the most important tournament (of the year) for me, and I really want to do well at Queen's and at Wimbledon this year."

After his demoralizing defeat -- his third in grand slam finals -- Murray suggested he might not play for "a few months" but he is listed to participate alongside other top ten players David Ferrer, Robin Soderling, Jurgen Melzer and Tomas Berdych.

Murray, who will be seeded third, won the tournament in 2008. Djokovic is the top seed.