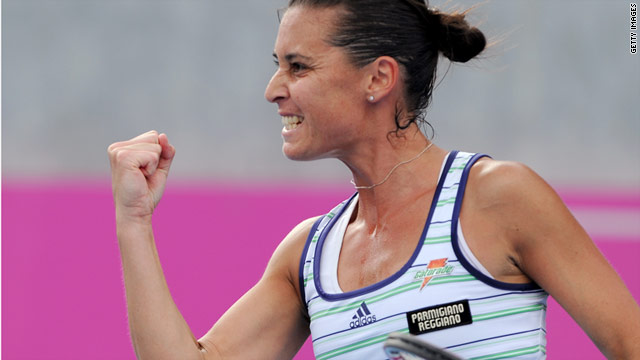 (CNN) -- Two-time defending Fed Cup champions Italy battled back to level at 1-1 against Australia in Saturday's first-round tie in the women's tennis teams competition, while 2010 runners-up the United States went 2-0 behind against Belgium.

In the two other World Group ties to be completed this weekend, France took at 2-0 lead over four-time champions Russia while the Czech Republic gained a 2-0 advantage over 2002 winners Slovakia, with two more singles and one doubles match left to play .

There will be everything to play for at Hobart's Domain tennis center on Sunday, after wins for Australia's Jarmila Groth and Italy's Flavia Pennetta in the opening singles matches left the first-round tie finely poised.

World number 31 Groth got the home side off to a good start in the Tasmanian city, fighting her way to an impressive 6-7 (4-7) 6-3 6-3 victory over reigning French Open champion Francesca Schiavone.

It is my first Fed Cup singles and it is very important and exciting. It is one of the great wins for me
--Jarmila Groth
RELATED TOPICS

"It is my first Fed Cup singles and it is very important and exciting, and I beat someone who is No. 4 in the world," Groth, winner of the WTA tournament held in Hobart in January, told the official Fed Cup website.

"It is one of the great wins for me and I am happy and excited."

But French Open runner-up and world number five Sam Stosur could not repeat Groth's success, with Pennetta winning the equally-close encounter 6-7 (5-7) 7-6 (7-5) 6-3 -- the first time an Italian has beaten an Australian in the nations' sixth meeting in the competition.

"We both fought hard and wanted to win the point for our teams. She had a few chances in the first and second sets but I was playing well," Pennetta said.

"This match was decided by one or two points and it was a really good match. I think the crowd enjoyed it."

Stosur and Schiavone will now face each other in a repeat of their Roland Garros final on Sunday, as the two nations target a place in April's semifinals.

The U.S. team, defeated by the Italians in the last two Fed Cup finals, made a disappointing start to their 2011 campaign after Belgium's pairing of Kim Clijsters and Yanina Wickmayer proved too strong for Melanie Oudin and Bethanie Mattek-Sands.

Newly-crowned Australian Open champion Clijsters and world number 31 Wickmayer have put Belgium just one win away from a place in the last four.

Wickmayer delighted the home crowd in Antwerp with a 6-1 7-6 (8-6) win over the flamboyant Mattek-Sands, before Clijsters -- showing no signs of fatigue following her win in Melbourne -- dispatched Oudin 6-0 6-4.

"It was fun to be out here playing again," said the world number two, who will seal victory for her country if she beats Mattek-Sands in Sunday's first singles match.

It was fun to be out here playing again. It's nice to play here after a win because the people have been so supportive
--Kim Clijsters

"Obviously it's nice to come here and play here after a win because the people have been so supportive. I've kept them up during the night with the time change with Australia and it's nice to be back here."

The Czech Republic look likely to be Belgium's opponents in the semifinals after dominating against eastern European neighbors Slovakia.

"I made a great start," said Kvitova, who faces Hantuchova in Sunday's first reverse singles."Yesterday Lucie and I were joking about 2-0, and we are very happy about it -- but we didn't really expect it."

France could be next up for the winners of the battle between Australia and Italy after stunning a strong Russia line-up at the Olympic Stadium in Moscow.

Alize Cornet, the world number 67, did not let an ankle injury affect her in a 3-6 6-3 6-4 win over double grand slam champion Svetlana Kuznetsova.

Former world number one Maria Sharapova, still struggling to get back to the top of the game after a string of injury problems, was then dismantled 6-4 6-3 by 83rd-ranked Virginie Razzano.

Should Kuznetsova and Sharapova fare better in Sunday's reverse singles matches, the result of the tie could come down to a doubles match set to feature another struggling former world number one, Dinara Safina.