Illness forces Sharapova to pull out of Paris event 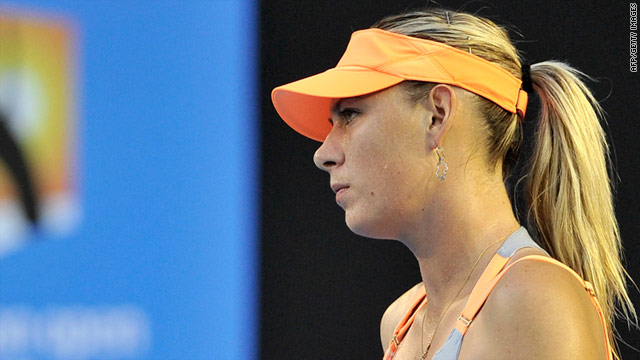 A throat infection has meant that Maria Sharapova will take no further part in the Paris Indoor tournament.
STORY HIGHLIGHTS

(CNN) -- World number 13 Maria Sharapova has been forced to withdraw from the Paris Open suffering from illness.

Former Wimbledon champion Sharapova was handed a wild card place for the indoor tournament, but has been troubled by a throat infection and will take no further part in the event after consulting a doctor on Thursday.

"I've really done everything to be ready, but unfortunately, I'm unable to play. I want to apologise to my fans and to thank the tournament for having been so understanding and supporting me," the Russian said in a statement.

Sharapova was replaced by "lucky loser" Stephanie Cohen-Aloro of France who went on to lose 7-5 6-3 to America's Bethanie Mattek-Sands in her second round match.

Meanwhile, Australian Open champion Kim Clijsters will replace Denmark's Caroline Wozniacki as the new world number one if she wins her quarterfinal on Friday.

The Belgian, who has been top of the world rankings in both 2003 and 2006, will face Jelena Dokic for a last-four place, after the Australian shocked fifth-seeded Russian Nadia Petrova 6-4 7-6.

Also through to the quarterfinal is fourth seed Petra Kvitova, who defeated fellow-Czech Barbora Zahlavova Strycova 6-4 6-7 7-6.

There were no surprises in the Pattaya Women's Open in Thailand, with top seed Vera Zvonareva and fourth seed Daniela Hantuchova both going through to the last eight in straight sets.

However, eighth seed Sara Errani of Italy was given a scare before beating Ayumi Morita of Japan 2-6 7-5 6-2.

Meanwhile, on the men's ATP Tour, fourth seed and Wimbledon finalist Tomas Berdych is through to the quarterfinals of the Rotterdam indoor event with a 6-4 4-6 7-5 victory over Russian Dmitry Tursunov.