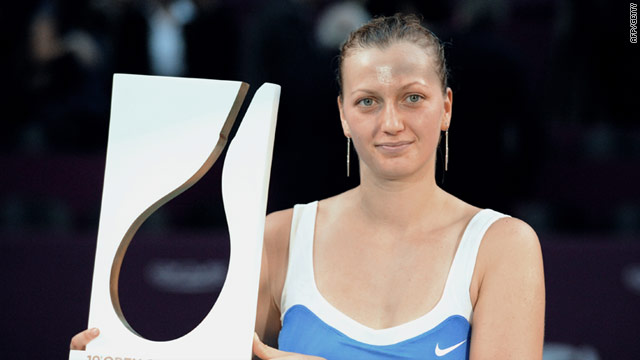 Petra Kvitova was claiming the biggest victory of her career by claiming the title in Paris.
STORY HIGHLIGHTS

Clijsters will be crowned as the new world number one in the latest WTA rankings, but had no answer to rising force Kvitova in the French capital.

The 20-year-old Kvitova was claiming her third career title but her most famous scalp as Clijsters could not repeat the form which has seen her dominate in recent months.

Kvitova took the lead with an early break and although Clijsters broke back she immediately moved ahead again 4-2 and closed out the set.

It was a similar pattern in the second set with Clijsters recovering to level at 3-3, but she was broken again and Kvitova kept her nerve for a famous victory after just an hour of action.

When you have Kim in front of you, you have nothing to lose. I had to be the first to hit the ball
--Petra Kvitova
RELATED TOPICS

"I'm so happy, what more can I say?" Kvitova said after clinching victory.

"When you have Kim in front of you, you have nothing to lose. I had to be the first to hit the ball," she told AFP.

Belgium's Clijsters acknowledged that she had been below her best.

"She put me under lots of pressure when she played in the middle of the court," said Clijsters.

"As a result, I wasn't able to develop my best game."

In other WTA Tour final action Sunday, Daniela Hantuchova of Slovakia scored a convincing 6-0 6-2 victory over Italy's Sara Errani at the Pattaya Open in Thailand.

On the men's ATP Tour, Sweden's Robin Soderling continued his outstanding start to 2011 with a 6-3 3-6 6-3 defeat of France's Jo-Wilfried Tsonga to win in Rotterdam.

World number four Soderling, the top seed, began the year by claiming the Brisbane title and his only defeat came in the fourth round of the Australian Open to Ukraine's Alexandr Dolgopolov.

Soderling, who was retaining the crown on the fast indoor carpet in the Dutch port city, gained the decisive break in the deciding set for 5-3 and served out for his eighth career title.