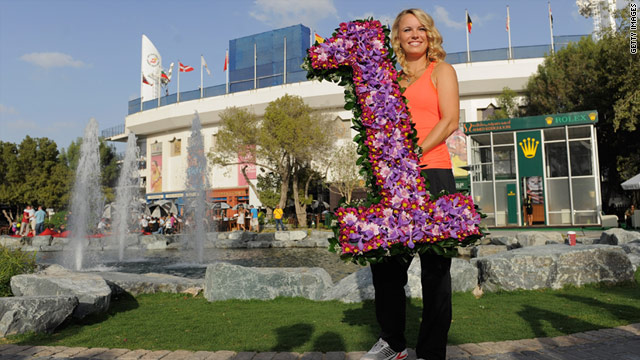 (CNN) -- Caroline Wozniacki has regained the women's world number one ranking from Belgium's Kim Clijsters, after beating Shahar Peer to reach the semifinals of the Dubai Tennis Championships on Friday.

The Dane eased past the ninth seed 6-2 6-4, and will now replace Australian Open champion Clijsters when the new WTA rankings are published on Monday.

Clijsters, who skipped the hard-court event in the United Arab Emirates, will have held the number one ranking for just seven days.

The 27-year-old rose to the top spot again -- having first done so in 2003 --when she reached the last four of the Paris Open, but left Wozniacki with a chance to reclaim the position when she lost to Petra Kvitova in the final.

The 20-year-old Wozniacki will now remain at the top of the rankings at least until after the U.S. tournament in Indian Wells which starts on March 23.

However, the 2009 U.S. Open finalist -- who is yet to win a grand slam title -- insisted winning tournaments is more important to her than being No. 1.

"I've said all along I wasn't sure about whether I could become number one this week, and that my focus really is not upon that," she told reporters.

"For the moment it's more important to concentrate on what I have to do and try to win the tournament."

Her achievement was marked in a much more low-key fashion then when she became the 20th woman in history to reach the summit in October last year.

Due to fears over the safety of Peer -- who became the first woman from Israel to play in the Arab state in 2010 -- the match was played on a remote outside court with few spectators and heavy security, where there were no on-court celebrations.

Next up for Wozniacki will be Serbian former world No. 1 Jelena Jankovic, who defeated Australian fourth seed Sam Stosur of Australia in three closely-contested sets.

In the other half of the draw, two-time grand slam champion Svetlana Kuznetsova of Russia beat Polish eighth seed Agnieszka Radwanska 7-6 (9-7) 6-3 in the penultimate quarterfinal.

The Russian will next face Italian 11th seed Flavia Pennetta, who thrashed Russia's Alisa Kleybanova 6-2 6-0 in the late match.

Elsewhere, at the men's Marseille Open, Swedish top seed and world No. 4 Robin Soderling progressed to the semifinals with an easy straight-sets win over France's Michael Llodra.

The two-time French Open finalist came through 6-1 6-4, and will next play Dmitry Tursunov after the Russian defeated Austrian fourth seed Jurgen Melzer 6-4 2-6 6-1 in Friday's closing match.

In the other half of the draw of the ATP World Tour hard-court tournament, world No. 7 and Wimbledon runner-up Tomas Berdych was knocked out by Croatia's Marin Cilic.

The former world number nine swept aside his Czech opponent 6-3 6-4 to book his place in the semifinals of the French event, where he will face third seed Mikhail Youzhny.

The Russian ended home hopes with a 6-4 2-6 6-4 win over sixth seed Jo-Wilfried Tsonga.