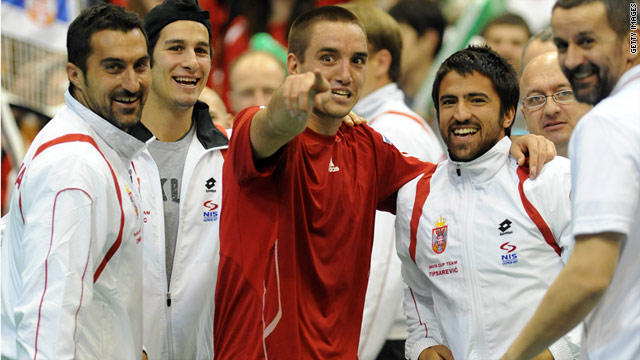 Viktor Troicki, center, celebrates with his teammates after securing victory for Serbia in the first round of the Davis Cup.
STORY HIGHLIGHTS
RELATED TOPICS

(CNN) -- Davis Cup champions Serbia have progressed to the quarterfinals of the men's team tournament after a comfortable 4-1 win over India in Novi Sad.

World No. 18 Viktor Troicki sealed victory for the Serbs in front of their partisan home supporters with a 6-4 6-2 7-5 success over India's highest-ranked singles player Somdev Devvarman.

And Janko Tipsarevic added the icing on the cake by thrashing Karan Rastogi 6-0 6-1 in the final singles rubber.

India's only triumph came courtesy of world No. 93 Devverman who beat 45th-ranked Tipsarevic in straight sets on day one of their first-round world group tie.

Both teams were missing their best players for the tie, with world No. 3 Novak Djokovic -- who led Serbia to victory over France in the 2010 final -- and Indian doubles pairing Leander Paes and Mahesh Bhupathi having opted out.

Next up for Serbia will be Sweden, after the Scandanavians built up an unassailable 3-0 lead in the best-of-five match tie over Russia on Saturday.

Russians Dmitry Tursunov and Igor Andreev won both Sunday's reverse singles rubbers over Simon Aspelin and Joachim Johansson respectively in Boras, but it was too late for them to progress any further in the event.

Philipp Petzschner was the hero for Germany after the world No. 67 defeated big-serving Ivo Karlovic of Croatia 6-4 7-6 7-6 in their tie's deciding rubber in Zagreb.

Marin Cilic had delighted the home crowd by defeating Philipp Kohlschreiber 6-2 6-3 7-6 in Sunday's opening rubber, but Petzschner kept his nerve to see Germany through.

Germany will now face France, who battled past Austria 3-2 in Vienna as Jeremy Chardy scored the decisive point with a 2-6 7-6 6-3 6-3 win over Martin Fischer.

World No. 8 Andy Roddick, playing in the Davis Cup for the first time since 2009, secured the United States their quarterfinal berth with a 3-6 7-6 6-3 6-3 win over Paul Capdeville of Chile to put the Americans 3-1 ahead.

John Isner completed the job in Santiago, beating Guillermo Rivera 6-3 6-7 7-5 to give the visitors a 4-1 overall victory.

The U.S. team will now face 2008 and 2009 champions Spain in the last eight, after the team lead by world No. 1 Rafael Nadal and comprising of two other top-10 players David Ferrer and Fernando Verdasco, booked their place in the final after racing to a 3-0 lead over Belgium in Charleroi on Saturday.

Nadal made it 4-0 with a 6-4 6-2 victory over Olivier Rochus, although the home side claimed a point on the board by winning the final singles rubber.

Argentina had already secured their place in the last eight after going 3-0 up against Romania in Buenos Aires on Saturday.

The teams shared the reverse singles rubbers to give the home side a 4-1 win and they now play Kazakhstan, who provided the biggest upset of the weekend in their first appearance in the World Group, beating the Czech Republic 3-2 in Ostrava just hours after finding out their hotel rooms had been burgled.

Meanwhile at the WTA Malaysia Open, Australia's Jelena Dokic won her first title on the women's tour since 2002 when she beat world No. 31 Lucie Safarova of the Czech Republic.

Former world No. 4 Dokic showed glimpses of the greatness that saw her reach the Australain open quarterfinals in 2009 to defeat her fifth-seeded opponent 2-6 7-6 6-4 in Sunday's final, winning her sixth career singles title in the process.