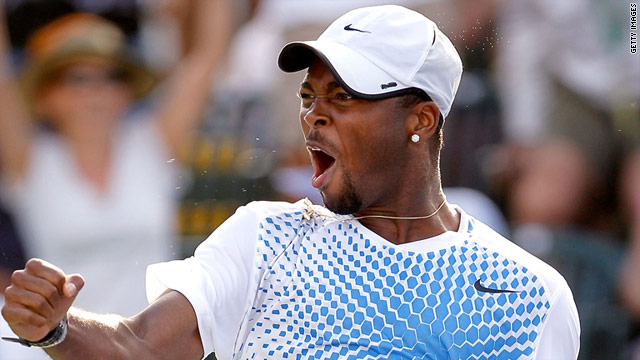 (CNN) -- Fifth seed Andy Murray has crashed out in his opening match of the Indian Wells tournament in California, beaten in straight sets by American qualifier Donald Young -- ranked 143rd in the world.

Murray, who reached the final of the Australian Open but then lost in the first round of his only other tournament this year in Rotterdam, looked out of sorts against his 21-year-old opponent, with Young progressing 7-6 6-3 for the biggest win of his career.

"I thought I started the match well, and then when it got close to the end of the first set, I didn't do anything particularly well," Murray told the official ATP Tour website.

"I didn't do anything to really lift myself. The crowd were for him and he started playing better. I didn't find my way back into the match," added the British number one.

Murray was soon joined on the sidelines by Spanish sixth seed David Ferrer, who was also beaten 7-6 6-3, this time by unseeded Ivo Karlovic.

I didn't do anything to really lift myself. The crowd were for him and he started playing better
--Andy Murray
RELATED TOPICS

The Croat continued the form he showed when setting a new world record for the fastest-ever serve in the Davis Cup last week, posting his first victory over Ferrer in three attempts.

However, there were no such slip-ups for top seed Rafael Nadal, who barely broke sweat in easing past South African Rik de Voest 6-0 6-2.

The Spaniard will now face American Ryan Sweeting, who beat 27th seed Juan Monaco of Argentina 6-1 0-6 6-1 in a topsy-turvy encounter.

World number one Wozniacki took just over an hour to reach the next round with a 6-3 6-2 victory.