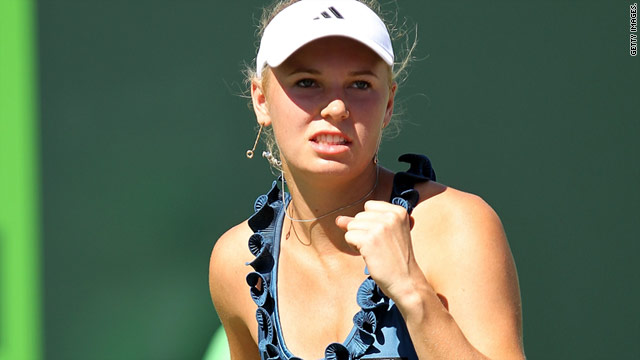 The world No. 1 celebrates victory in her first match of the Miami Open tennis tournament.
STORY HIGHLIGHTS

(CNN) -- World number one Caroline Wozniacki held off a late charge from home favorite Bethanie Mattek-Sands to reach the third round of the Sony Ericsson Open in Miami on Thursday.

After cruising through the opening set, the Dane looked to heading for an easy win as she raced to a 5-3 lead in the second, but the flamboyant Mattek Sands produced a brief fight back before Wozniacki eventually closed out proceedings 6-2 7-5.

"It was pretty tough because Beth just went for it," the 20-year-old, who received a bye through the first round of the Florida hard-court tournament, told the official WTA Tour website.

"You never know what to expect from her -- she goes for her shots. It's difficult to get a rhythm. I just had to fight."

It was pretty tough. It's difficult to get a rhythm. I just had to fight
--Caroline Wozniacki
RELATED TOPICS

The world No. 4 wil nowl face 31st-ranked Lucie Safarova in the third round of the Premier level event, after the Czech recorded a straightforward 6-2 6-4 win over Switzerland's Patty Schnyder.

They were joined in the third round by fellow ex top-10 players Svetlana Kuznetsova of Russia, who beat Simona Halep 6-0 6-4 and Slovakia's Daniela Hantuchova, who posted a 6-1 6-3 victory over American Melanie Oudin.

Meanwhile in the men's first round draw, Japan's Kei Nishikori put any concerns about the situation in his home country behind him as he beat France's Jeremy Chardy in straight sets.

After playing in a charity football match to raise money for victims of the recent earthquake and tsunami on Wednesday, the 21-year-old came through 7-6 6-2 to set up a second-round meeting with world No. 1 Rafael Nadal.

"I'm really excited to play Rafa," he told the official ATP Tour website. "I have to do something different in my game of course, more aggressive than usual."

Serbia's Janko Tipsarevic progressed with a 6-4 7-6 win over Dutchman Robin Haase, while Spain's Feliciano Lopez also made it through after battling past up-and-coming Lithuanian Richard Berankis 4-6 7-6 6-3.