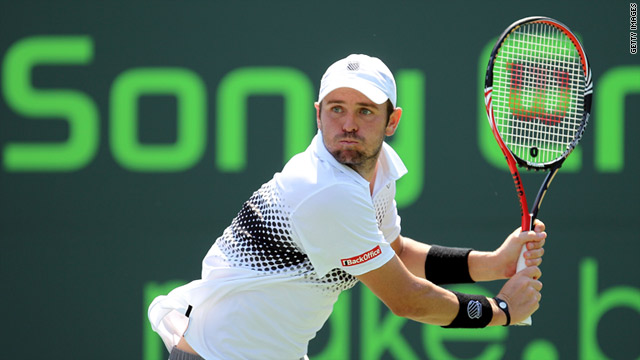 Mardy Fish is America's main hope of victory in Miami after the elimination of defending champion Andy Roddick.
STORY HIGHLIGHTS

(CNN) -- Mardy Fish kept alive American hopes of victory in the Sony Ericsson Open in Miami on Sunday, beating Frenchman Richard Gasquet in straight sets to reach the last 16 of the event.

Fish, seeded 14th, is the highest-ranked home player remaining following the elimination of defending champion Andy Roddick, and he never looked in danger of following his compatriot out of the tournament, winning 6-4 6-3 in 91 minutes.

However, the route to the quarterfinals looks a tricky one for Fish, with either fourth seed Robin Soderling or former U.S. Open champion Juan Martin del Potro awaiting in the next round.

"First thing that comes to mind is underdog, which is probably what I'll be," Fish told the official ATP Tour website.

First thing that comes to mind is underdog, which is probably what I'll be
--Mardy Fish
RELATED TOPICS

"Juan seems to be back to his normal self and Robin has three titles this year and is playing as well as anyone, so it will be tough."

Meanwhile, in the women's tournament, French Open champion and fifth seed Francesca Schiavone reached the last 16 with a 6-4 7-6 victory over Lourdes Dominguez Lino.