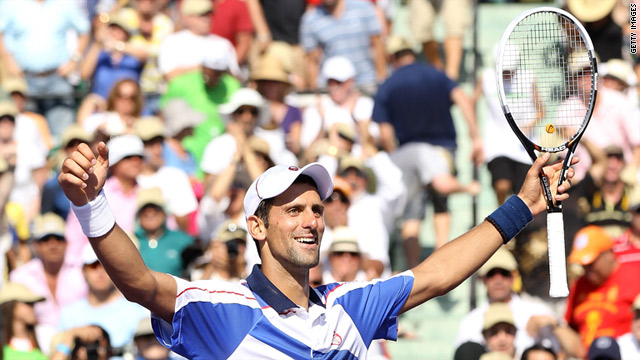 Novak Djokovic savors his final's triumph over Rafael Nadal in Miami to win his fourth title of 2011.
STORY HIGHLIGHTS

Djokovic saw off Nadal 4-6 6-3 7-6 for his 24th straight victory since the start of the season, including the Australian Open title and two Masters crowns, both times at the expense of the Spaniard in close finals.

After more than three hours of pulsating action, Nadal finally cracked in the third set tiebreaker at 2-2 when he served up a double fault.

His Serbian opponent seized on the opening as he took five points in a row to hold four match points at 6-2.

Nadal bravely saved two, but on the third a forehand winner gave Djokovic his second title at the prestigious hard court tournament.

"It was very close and it really could have gone either way," he said after lifting the trophy.

"It was one of the best finals I ever played in my life, and it's always a great pleasure and honor playing against Rafa, who is a good friend and a great champion."

Nadal, who will now turn to his favorite surface of clay as he defends his ranking against the fast rising number two Djokovic, conceded he had been second best.

"Today I had some good chances, but Novak was too good for me this afternoon," he said.

A single break of service in each set saw the pair share the opening two sets, which were marked by punishing baseline rallies.

The pattern continued in the third, with neither man able to break though on his opponent's service, setting the scene for the decisive tiebreaker.