Stosur strolls into Stuttgart second round 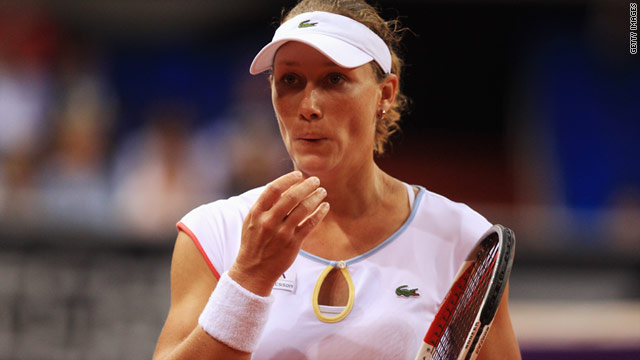 (CNN) -- Fifth seed Samantha Stosur made it safely through to the second round of Porsche Tennis Grand Prix in Stuttgart, Germany on Tuesday beating Spain's Maria Jose Martinez Sanchez 7-5 6-1.

Last year's finalist had to battle hard to gain the first set, but opened up a 5-0 lead in the second with Sanchez only narrowly avoiding a whitewash winning the penultimate game of the match.

World number one Caroline Wozniacki of Denmark is due on court on Wednesday as she squares up to Slovakia's Zuzana Kucova.

But there are continuing concerns over the well-being of Russia's Anna Chakvetadze who was forced to retire for the third time this year because of dizzy spells.

The 24-year-old qualifier collapsed again during her first-round match with Kucova.

Chakvetadze has already retired in similar circumstances this season at the tournament in Dubai in February and again at Indian Wells in March.

"I started the match feeling fine, but I knew the dizziness was coming and started to feel worse in the second set," Chakvetadze said, AFP reported.

"It was the same feeling as the two times before," she added, AFP reported.

The Russian is currently seeking medical advice, but doctors remain unsure as to the cause.

In other matches, Germany's Andrea Petkovic came back from being a set down to beat Austrian qualifier Tamira Paszek 3-6 6-2 6-2.

Petkovic will be joined in Wednesday's second round by her compatriots Sabine Lisicki, who will play sixth seed Na Li of China, and Julia Goerges who has a tough match in prospect against number four seed Victoria Azarenka from Bulgaria.