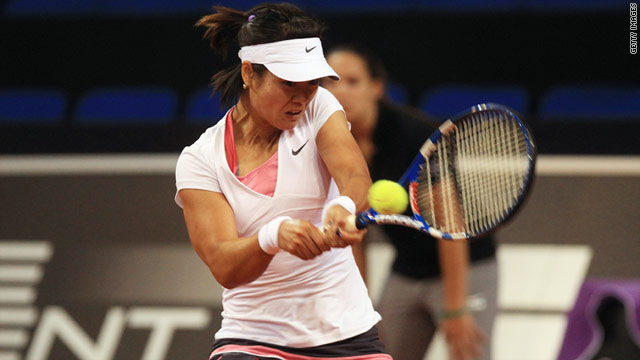 Li Na, from China, was beaten in the Australian Open final by Kim Clijsters in January.
STORY HIGHLIGHTS
RELATED TOPICS

(CNN) -- China's Li Na won her first match since losing in the final of the Australian Open in January after victory over Anastasija Sevastova at the Porsche Tennis Grand Prix in Germany.

Li lost to Kim Clijsters in the first major of the year after becoming the first Asian player to reach a grand slam singles final.

She followed that defeat in Melbourne with four first round exits at tournaments in Dubai, Doha, Indian Wells and Miami before she finally ended her win drought in Stuttgart with a 6-2 6-3 triumph over her Latvian opponent.

"I'm excited. I've been waiting for this win for a long time," Li told the official WTA Tour web site. "I've been asking myself what I want to do and how I can get back on the winning track.

"Coming into this clay court season I knew I had to stand up and take charge."

Li said she was at a loss to explain her poor run of form that followed her Melbourne reverse: "I didn't know if I was the one who changed or it was the other players playing better against me.

"It was after Miami that we really thought hard about everything, but my team always stuck behind me and believed in me. Now I'm back and I'm so happy."

Li will face Dominika Cibulkova or German wildcard Sabine Lisicki in the second round.

German qualifier Kristina Barrois also made it into round two, after she disposed of the Czech Republic's Lucie Safarova, 6-1 6-4.