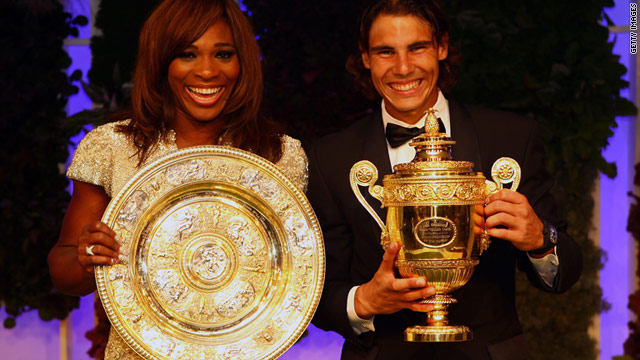 (CNN) -- The winners of this year's singles titles at Wimbledon will receive record prize money of $1.7 million, organizers have confirmed.

World number one Rafael Nadal, who beat Thomas Berdych in the men's final in 2010, and Serena Williams, who defeated Vera Zvonareva in the women's, received prize money of over £1 million ($1.6m) for the first time ever.

Philip Brook, chairman of the All England Club, who host the competition, said: "Leading international sports events such as Wimbledon are all about the quality of the players on show.

"It is important that we offer prize money which suitably rewards the players both for the box-office appeal they bring to the event and for their supreme performances on court."

The Australian Open pays winners the most out of the four grand slam tournaments in the tennis season, with Novak Djokovic and Kim Clijsters picking up $2.2 million for their Melbourne victories in January.

This year's Wimbledon, which starts on Monday June 20, will also see spectator capacity increased by 1,000 thanks to the opening of two revamped courts on the London site.