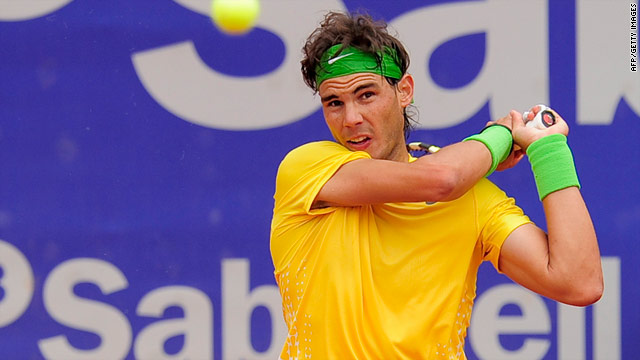 Spain's "King of Clay" Rafael Nadal is seeking to win his sixth title in seven years at the Barcelona Open.
STORY HIGHLIGHTS

(CNN) -- World No. 1 Rafael Nadal is on the verge of another notable career milestone after cruising into the semifinals of the Barcelona Open on Friday.

The Spaniard needed just 75 minutes to brush off the challenge of French seventh seed Gael Monfils, winning 6-2 6-2 to clinch the 499th match victory of his career.

It was his 27th successive success at the clay-court event, which he won five years in a row before missing last year's tournament, and his 32nd in a row on his favored surface.

"A 6-2, 6-2 is very positive, it's more than I expected. To win Monte Carlo last week and now to be in the Barcelona semifinals, it's really positive," he told reporters.

"I couldn't have started the clay season any better, but I have to keep on working."

Will bigger balls slow down the rocket men of tennis?

I couldn't have started the clay season any better, but I have to keep on working
--Rafael Nadal
RELATED TOPICS

Nadal has dropped only two sets in the Catalan capital since his second-round defeat by Alex Corretja in 2003.

The 24-year-old will next face Croatia's 56th-ranked Ivan Dodig, who beat Nadal's compatriot and fellow left-hander Feliciano Lopez 6-4 2-6 6-4 in just under two hours.

Nadal still has some way to go before he gets near the record number of post-1968 Open Era victories of 1,222 which is held by American legend Jimmy Connors.

Ivan Lendl is the only player to have reached four figures, while Nadal's great rival Roger Federer is the only other current player in the top-10.

The 16-time grand slam champion, who like world No. 2 Novak Djokovic is not playing this week, is in eighth place with 743 wins.

No. 1 Nadal through to quarterfinals

Ferrer, beaten by Nadal in last Sunday's final, will next take on eighth seed Nicolas Almagro -- who beat their fellow Spaniard Juan Carlos Ferrero by the same scoreline.

It ended a dream comeback run for the 2001 Barcelona champion and runner-up in 2005, with the former world No. 1 making his first tournament outing of 2011.

The 31-year-old last played at the U.S. Open in September, after which he had wrist and knee surgery.

The main women's event this week in Germany will resume on Saturday after a public holiday, with No. 1 Caroline Wozniacki facing Poland's Agnieszka Radwanska in the semifinals of the Porsche Tennis Grand Prix in Stuttgart.

Last year's runner-up Samantha Stosur of Australia will take on Julia Gorges, the first German to reach the last-four stage since 1999.

Safina, who turns 25 next week, has achieved her best result this year after retiring with a back injury during her last outing at the quarterfinals in Andalucia in Spain earlier this month.

She has not reached the semifinals of a WTA Tour event since losing in the title match at Cincinnati in August 2009.

Safina, now ranked 74th, will next play Italy's Alberta Brianti, who battled past 19-year-old American Melanie Oudin with a 7-5 5-7 6-0 victory after two hours and 45 minutes.