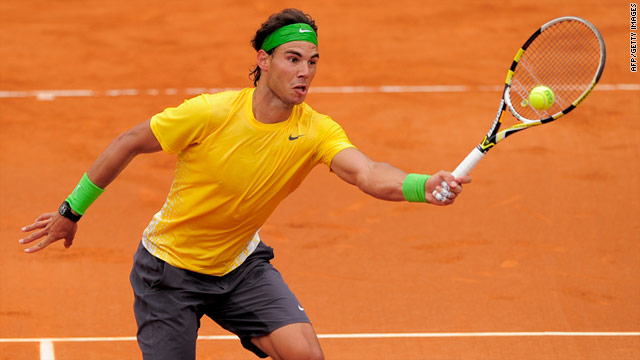 (CNN) -- World No. 1 Rafael Nadal became the second-youngest player to reach 500 career wins as he moved into the final of the Barcelona Open on Saturday.

Only the legendary Swede Bjorn Bjorg has reached the milestone at an earlier age, being 23 years and seven months when he achieved it.

It extended Nadal's winning run on clay to 33 matches, and 28 in a row in the Catalan capital -- where he won five successive titles before missing last year's event due to a knee problem.

My career has turned out better than I've ever dreamed possible. I'm enjoying it because you never know when it all might end
--Rafael Nadal
RELATED TOPICS

"Today I played worse than yesterday, but despite of that I won and that's very positive," Nadal told AFP. "But Ivan had a great tournament, a start of a spectacular season.

"My career has turned out better than I've ever dreamed possible. I'm grateful for my life and those who have helped me. I'm enjoying it because you never know when it all might end."

Dodig had eliminated third seed Robin Soderling and No. 15 Milos Raonic in his first appearance at the tournament, but could not continue his run against the "King of Clay" in their first encounter despite breaking the top seed's serve early in each set.

However, the 26-year-old will move into the top-50 of the ATP Tour rankings for the first time this week, having started the year at 88th.

Nadal will have the chance to add to his 44 career titles on Sunday when he faces a player he beat in last weekend's Monte Carlo final to seal a seventh successive title in the principality.

He also defeated Ferrer in the 2008 and 2009 title matches in Barcelona, as well as last year's Rome Masters final.

Will bigger balls slow down the rocket men of tennis?

Fourth seed Ferrer is hoping to be the ninth Spaniard to win the event in as many years, with the 29-year-old denying compatriot Nicolas Almagro a first final appearance.

The world No. 6 won 6-3 6-4 in just over 90 minutes for his seventh successive triumph against the eighth seed.

"It was a tough win physically," Ferrer, who has been trobuled by a calf injury, told AFP. "It was only two sets but they were hard-fought. I'm hoping to still feel fully fit for the final.

"The calf felt okay but I could feel it as the match progressed. But I can recover for Sunday."

Meanwhile, Julia Gorges became the first German in 15 years to reach the final of the Porsche Tennis Grand Prix in Stuttgart when she upset fifth seed Samantha Stosur on Saturday.

The Australian was runner-up last year before going on to reach the French Open final, but she lost 6-4 3-6 7-5 to the 22-year-old.

Gorges, whose only title so far came on clay in Austria last year, will play world No. 1 Caroline Wozniacki on Sunday.

Anke Huber was the last German to progress so far in the clay event, losing to Martin Hingis in 1996.

Dinara Safina's hopes of a first final appearance since August 2009 were ended when she had to pull out of her last-four clash at the Fes Grand Prix in Morocco on Saturday.

Halep, 19, will have the chance to go one better than last year's final defeat after beating Belgium's Kirsten Flipkens 7-5 6-4 in her semi-final.