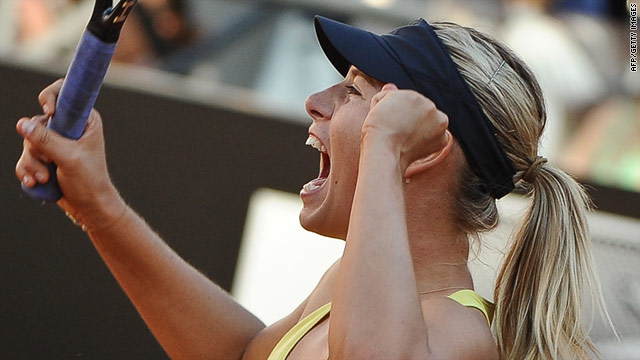 Maria Sharapova took a 3-2 lead in her meetings with Caroline Wozniacki, who she also beat in Rome in 2008.
STORY HIGHLIGHTS

(CNN) -- Former world No. 1 Maria Sharapova has the chance to win her first title in a year after beating current top women's tennis player Caroline Wozniacki in the semifinals of the Rome Masters on Saturday.

The Russian avenged her defeat by the Dane at the same stage of the Indian Wells hard-court event in March as she triumphed 7-5 6-3 on Italian clay.

The seventh seed will take on last year's French Open runner-up Samantha Stosur in Sunday's final, having lost in four title matches since her 22nd career crown in Strasbourg 12 months ago.

"After losing in the final of the French last year, I did struggle mentally for a little bit. It's not always easy to see the positives of a tournament after you lose," Stosur told the WTA Tour website after beating the 2011 Australian Open runner-up, who was fourth seed.

"I had played some good matches over the last 12 months but wasn't able to make it all the way to the end again -- I'm excited I've done it here in Rome."

Stosur has lost all seven encounters with Sharapova, but none of those matches have been on clay.

"It's the first time I'm playing her on clay and her best results have been on clay," Sharapova said.

"With every year I feel better and better on it. When I was first on tour I wasn't the strongest, I didn't have the strongest legs and I didn't find it easy to recover from one match to the next, but I've improved on that."

Sharapova and Wozniacki both struggled to hold their own serve, but the three-time grand slam champion fired 36 winners to her younger opponent's 15.

Sharapova, who has yet to reach a French Open final despite winning the Australian, U.S. and Wimbledon crowns, rattled off five games in a row to clinch the match after trailing 3-1 in the second set.

She also beat Wozniacki in the last 16 in Rome in 2008, and now has a 3-2 edge in meetings with the 20-year-old after two successive defeats.