Wozniacki warms up for French Open with Brussels title 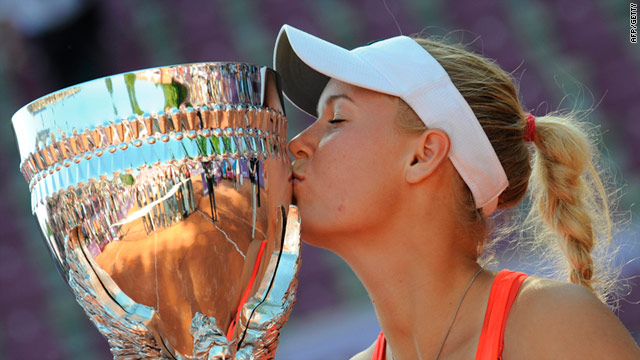 Caroline Wozniacki was claiming her fourth title of 2011 as she warmed up for the French Open.
STORY HIGHLIGHTS

(CNN) -- World number one Caroline Wozniacki enjoyed the perfect preparation for the French Open as she beat Chinese star Shuai Peng Saturday to win the WTA tournament in Brussels.

Wozniacki will be aiming to win her first grand slam title at Roland Garros and warmed up with a 2-6 6-3 6-3 victory in the final to claim her 16th career title.

The Dane also beat reigning French Open champion Francesca Schiavone in three sets in the semifinals and now heads to Paris where she faces Japanese veteran Kimiko Date-Krumm in her first round match.

"It's my fourth title of the season. I was pleased with the way I played and fought today," Wozniacki told the official WTA website.

It's my fourth title of the season. I was pleased with the way I played and fought today
--Caroline Wozniacki
RELATED TOPICS

"Now I'm looking forward to Roland Garros -- I think I play on Monday, but I'll be ready."

Peng had beaten number two seed Vera Zvonareva of Russia in her semifinal but was unable to make the most of her strong start as she took the first set.

Wozniacki's victory came after two hours 35 minutes as she wrapped up her first title on red clay.

Philipp Kohlschreiber partnered Philipp Petzschner as they gained a 6-3 7-6 win over Juan Ignacio Chela and Maximo Gonzalez in the deciding doubles.

Chela had earlier drew Argentina level with a 6-4 7-6 win over Kohlschreiber after Germany's Florian Mayer had earlier scored a straight-sets 7-6 6-0 win over Juan Monaco.

"This title is very special for us and to play in a team like this is always great fun," Kohlschreiber told AFP.