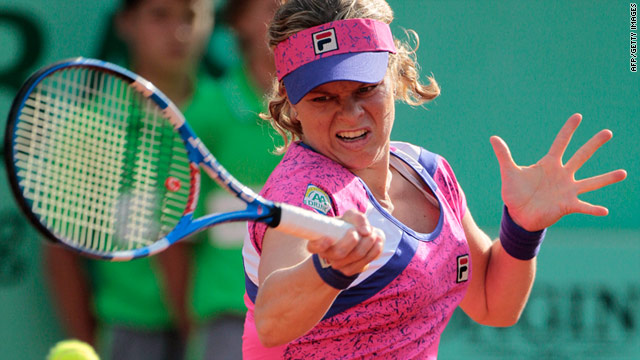 Kim Clijsters powers a forehand during her first round match against Anastasia Yakimova from Belarus at Roland Garros on Tuesday.
STORY HIGHLIGHTS

The reigning U.S. and Australian Open champion has been a losing finalist in Paris on two occasions (2001 and 2003) and hasn't made an appearance since she lost in the semi-finals to her compatriot Justine Henin in 2006.

Clijsters faces Arantxa Rus from the Netherlands in the next round.

Maria Sharapova wasted little time on court Tuesday brushing aside the challenge of Croatia's Mirjana Lucic 6-3 6-0 is just under an hour.

Seeded seventh, the Russian is also looking to secure her first French Open title and is in good form after her recent victory in Rome.

Isner pushes Nadal all the way in opener

"It was a tough beginning because she started off serving really big, and I didn't get too many looks on second serves. But once I got a good rhythm I felt like I started playing better and better," Sharapova said, AFP reported.

Fourth seed Victoria Azarenka recorded a straight-sets victory over Andrea Hlavackova of the Czech Republic 6-3 6-3 and will now play either Pauline Parmentier of France or Russia's Ksenia Pervak.

Sixth seed Li Na made heavy weather of her match against Czech Barbora Zahlavova Strycova but eventually won 6-3 6-7 (6-8) 6-3 to set up a tie against Silvia Soler Espinosa from Spain.

Britain's Elena Baltacha joined her compatriot Heather Watson in the second round at Roland Garros with a 7-5 6-2 win over Sloane Stephens, a qualifier from the United States.

The 2008 champion revealed after the match that a wrist injury, which kept her out of last week's Strasbourg event, had restricted her on court during the match.

"It is very frustrating. It's inflammation of the wrist but I didn't suffer it playing, I woke up with the problem. The bone has slipped and has caused friction. I'm very upset," the Serbian said, AFP reported.

It was also an emotional day for France's Virginie Razzano, whose fiance and coach Stephane Vidal died eight days ago after a long battle against a brain tumor.

The 28-year-old, who said afterwards that Vidal had encouraged her to play at Roland Garros before he passed away, was defeated by 24th seed Jarmila Gajdosova 6-3 6-1.