Clijsters crashes out of French Open 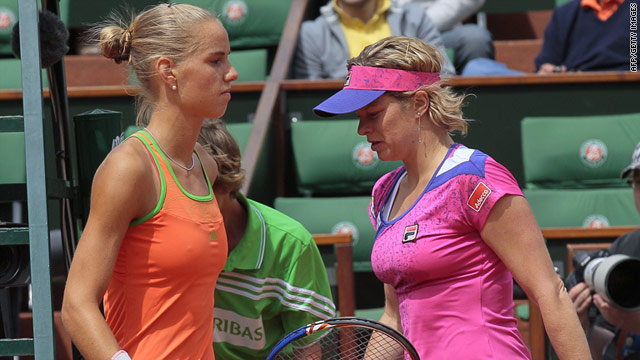 (CNN) -- Second seed Kim Clijsters suffered her earliest French Open exit in 11 years as she crashed out in the second round on Thursday.

The Belgian, seeking to win the clay-court grand slam event for the first time, failed to capitalize on two match-points as she was eliminated by unheralded Dutchwoman Arantxa Rus.

The 114th-ranked Rus, whose only previous match against a top-10 player was a three-set defeat by Maria Sharapova in Madrid this year, earned a clash with Russian 25th seed Maria Kirilenko.

If I wasn't feeling I was able to play tough matches, I wouldn't have made the decision to come to Roland Garros
--Kim Clijsters
RELATED TOPICS

The result means that Caroline Wozniacki will retain the No. 1 ranking, no matter her performance in Paris. The 20-year-old Dane moved into the third round with a nervous 6-3 7-6 (8-6) win over Canada's Aleksandra Wozniak on Wednesday and next faces 28th seed Daniela Hantuchova.

Clijsters returned to Roland Garros for the first time since losing in the 2006 semifinals, with her preparations hampered by a two-month injury layoff.

She comfortably won her opening match against Anastasia Yakimova of Belarus, but the 27-year-old failed to finish off a player who had never before got past the second round of a grand slam tournament.

"I'm still trying to figure it out," Clijsters, who lost in the first round of her French Open debut in 2000, told the WTA Tour website. "I started doubting a little bit. That's definitely the wrong attitude to have, especially for me on clay.

"She obviously started building up more confidence, playing a lot better and putting me on my back foot all the time. I couldn't really play my aggressive tennis anymore in that third set."

Clijsters insisted that she had recovered from the shoulder, wrist and ankle injuries that had sidelined her since March.

"My ankle feels fine, that had absolutely nothing to do with it. If I felt like I wasn't as ready as I would have liked to be, I wouldn't have come here," the four-time grand slam winner said.

"Physically everything was fine. If I wasn't feeling I was able to play tough matches, I wouldn't have made the decision to come to Roland Garros. I'm not going to sit here and say maybe I shouldn't have come here. That's the attitude of a real loser, I think. I gave it the best I had with the abilities I had."

With the Williams sisters ruled out by long-term injuries, and four-time Paris champion Justin Henin retired for a second time, Clijsters was one of the favorites to take the title.

Her exit is a boost to the chances of former No. 1 Sharapova, who survived a scare against 17-year-old world number 188 Caroline Garcia, who was playing in only her second tour level event.

The seventh-seeded Russian was a set and 4-1 down but recovered to triumph 3-6 6-4 6-0. Afterwards she told reporters: "She played unbelievable and the conditions were really tough."

Chinese sixth seed Li Na moved into the third round with a 6-4 7-5 win over Spanish qualifier Silvia Soler-Espinosa.

The Australian Open runner-up will next take on Romania's Sorana Cirstea, who knocked out 27th-seeded compatriot Alexandra Dulgheru 6-2 7-5.

Czech ninth seed Petra Kvitova eased to a 6-4 6-1 win over China's Zheng Jie to set up a clash with American Vania King.

Polish 12th seed Agnieszka Radwanska beat India's Sania Mirza 6-2 6-4, and could face Sharapova in the last 16 if she gets past Belgian No. 21 Yanina Wickmayer.